(WORT) — The University of Wisconsin’s Board of Regents are used to being greeted by protesters outside their monthly meetings. Campus groups often demonstrate by quietly holding signs or distributing flyers.

But the student-led protest that disrupted last Friday’s meeting at UW Madison’s Union South was among the more dramatic in recent memory. More than thirty members of the Black Out movement stood with black student organizers as they read aloud from a list of demands, calling on Regents to address “the failure of progress on diversity” across the UW System.

Each time Regent President Regina Millner banged her gavel to call for order, the group chanted her down with shouts of “Ashé Power!,” in an invocation of the West African concept of spirit energy or life force.

The protesters held the Regents’ attention for nearly five minutes, before police escorted them from the room without incident.

Among the students’ demands are calls for implementing a mandatory racial awareness curriculum for students, faculty, and administrators; funding culturally competent mental health professionals to help improve retention rates among students of color; and adopting a test-optional college admissions program to avoid the socioeconomic bias students say is built into the ACT and SAT.

Regents and System administrators have not issued an official statement in response to the student protest, and the UW System scrubbed the archived webcast of Friday’s meeting clean of the student intervention.

But System President Ray Cross did report to the Board of Regents Friday morning about a meeting he attended with many of the same students on January 21, saying “We talked about what the UW System has done to close achievement gaps… [and] improve graduation rates for students of color. We have done a lot. Are we where we need to be? No. Have we hit all the benchmarks and goals we set in the past? No, we have not.” 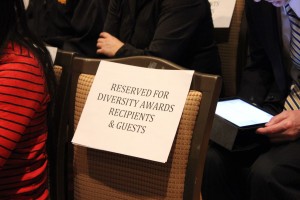 In addition to the usual agenda items, last week’s Regents meeting also featured a formal presentation of the Annual Diversity Awards, established by the Board to recognize those in the UW System working to improve access to higher education among underrepresented groups.

One of the three honorees this year was 4-H SySTEMatics, an initiative of UW Waukesha, Richland, and Milwaukee County Extension.

Terry says the Black Out protesters who disrupted the Regents meeting raise important issues that pick up where her work leaves off.

“What this program is trying to do, is bring these kids to these schools,” she says. “Once the kids are at the schools, [it’s about] making sure they stay in the schools, are comfortable, and have the resources to feel included.”

The UW System says racial diversity and inclusion will be important components of its next strategic plan, and that it is launching a system-wide diversity council to improve accountability.

But the bottom line for Nneka Akubeze is that the university must do more than pay lipservice to diversity. It must invest in producing results.

“We can hear from President Cross…that there’s more that needs to be done. We can even highlight some of the things that are being done,” Akubeze says. “But until we see a commitment of resources–that means people, that means time, and that also means money–right now it’s just talk, and we need action.”