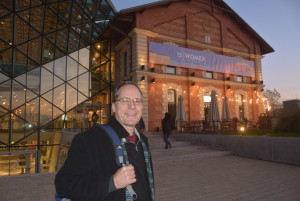 Our WOMEX experience really starts with arrival in Budapest. My wife, Paula White, and I arrived on Tuesday. We figure it might be our 12th visit here. While WOMEX was the reason to come to Budapest this time, we are also eager to see friends and familiar sights, and, of course, have some great food. Those of you who know Paula, also know that she is a talented and avid photographer. She provides all the photos in this blog.

WOMEX officially started on Wednesday evening with an opening concert at the wonderful new Budapest Palace of Arts, right on the bank of the Danube. The concert started with a special treat not listed in the program: an opening set by Muzsikás with music from Transylvania. We hadn’t seen them perform since their last Madison show nearly 15 years ago. Muzsikás received an award for artists of special merit at WOMEX 2008. Next, in a tribute to the role of Gypsy music of central Europe, was an excursion with five bands representing the breadth of Gypsy music and its influence on other styles. We heard solo village singing and ensemble performance of ethnic Gypsy songs, Gypsy solo violin playing Hungarian folk music, ensemble music stretching folk music into world music and ethno-jazz, and finally, a Gypsy orchestra featuring fiery Hungarian dance music. Following the concert, we danced at a Hungarian táncház with our good friends, the Dűvő Ensemble. Dűvő has performed in Madison twice before including one show at the Orton Park Festival.

A backdrop screen during the opening concert featured the artistic work of painter István Szentandrássy.  More of his work can be seen here: http://www.szentandrassy.hu/gallery.en_US.html 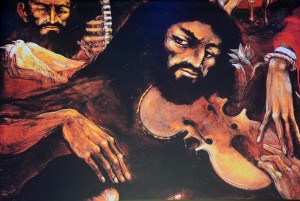 Here are some links for further reading:

What is a Hungarian táncház? https://en.wikipedia.org/wiki/T%C3%A1nch%C3%A1z