During the Summer 2017 pledge drive, you and other WORT listeners set a record for becoming new Automatic Monthly Donors—84. Thank you!

Why are we so excited about this increasing trend in Automatic Monthly donors?

Monthly donors continue their donations year-to-year at higher percentages than other donors, providing consistent income that WORT depends on. Compare: 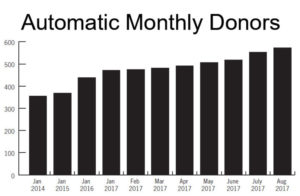 Monthly donations don’t require much staff time; the bank transfers are made electronically and the donations are batched into our donor database. The staff time saved might seem insignificant, but consider just one part of the time required to process a donation: data entry. On average, it takes 50 seconds to look up a donor, confirm that the correct donor has been selected, and enter the information (address changes, amount, how and when the donation was made) to complete one entry.

WORT is grateful for each and every one of the 5053 non-monthly donations we received in 2015. It takes over a week and a half to enter that many. That’s a lot of computer time!

Our non-monthly donors are generous, averaging $82.71 each in 2016, but because monthly donors spread out their gift over 12 months, they give more in a year. The average monthly donation is $15.07, a total of $180.84 annually. This average covers a broad range—from $5-a-month donors to those who give much more.

If we could double our current number of monthly donors, pledge drives could be lessened from six weeks a year to three weeks a year. We can’t eliminate them entirely because they remain the most cost-effective way to gain new donors, but only one week of specially planned pledge shows every four months sounds downright pleasant.

Signing up for monthly donations is easy! Go to wortfm.org and click How to Help. Under Support the Station, choose Automatic Monthly Donations. You can sign up there or print the form and mail it to WORT. You can also call Susan’s direct line, (608) 321-9579, to have a form and return envelope mailed to you.

This article originally appears in the September 2017 edition of “Radio Pilot“ newsletter.