Last week, the City of Madison Plan Commission held its first public hearing about an ordinance that would impose stricter regulations on short-term tourist rentals like Airbnb operations.

The ordinance is meant to address concerns from residents who live near so-called “party houses” that don’t comply with the City’s current regulations.

Fred Van Riet owns a home on Marathon Drive and lives about a hundred feet from a home that is allegedly violating the city’s guest limit allowed under city zoning ordinances and its 30 night per year rental allowance when the operator is not present.

Van Riet says he tried working with City Zoning, Public Health Madison and Dane County, and the Treasurer’s Office to enforce the current ordinance, but had no luck.

“The bottom line was nobody could enforce anything. So, they gave this Airbnb some tickets, but basically said [they couldn’t] force them to follow the rules, or stop operating, or anything,” Van Riet says. “So, it just felt helpless and it felt like the city had no way to enforce [its ordinance] when things went wrong with an Airbnb. So, in my opinion, [the agencies] need some way to deal with Airbnbs when they go rogue and don’t follow the rules at all.”

While the City looks to impose stricter regulations on tourist rooming houses, one platform, Airbnb, is allegedly looking to eliminate certain requirements for its hosts.

Matt Tucker is the Zoning Administrator for the City of Madison.

He says Airbnb is looking to modify its agreement with City Zoning so that it no longer collects room tax from operators who want to pay the room tax themselves.

“They don’t return our calls [and] they don’t talk to us. This change is clearly something that we’re not supportive of because we have a feeling that it might result in people simply not paying room tax anymore [when] these are hard enough already to track,” Tucker says.

“When we talk about what they have given us in the past, they refuse to give us information about the number of rentals, they refuse to give us information about who the [guests] are, how many nights they’ve stayed. All they do is give us a lump sum check [for the room tax]. That’s not something that I would say is something that a good business partner working with the community would do.”

Airbnb also sent an email to Madison hosts encouraging them to attend the Plan Commission meeting last week. It also provided a form letter for hosts to argue that the requirements “create unnecessary burdens for hosts and threaten the privacy of both hosts and guests.”

Peter Taglia is an Airbnb host in downtown Madison who opposes the proposed ordinance as it currently stands.

That’s because he says it would make the city’s affordable housing problem worse, not better, by preventing the flexible use of multi-unit properties.

“We could have an ordinance that actually helps with housing affordability and helps people buy two flats and rent out the top for a summer while [they’re] waiting for their kids to grow older or [their] parents to move in as they age, so there are a lot of these different important things that are missed, so we’re making that part of affordability worse [through the ordinance] when a lot of people are sometimes thinking that Airbnb is only bad, or tourist rooming houses are only bad for affordability,” Taglia says.

Taglia also says he would consider supporting an amended proposal if it seeks additional input from tourist rooming house hosts in Madison.

Sam Randall, a spokesperson for Airbnb, says the ordinance will hurt hosts who rely on supplemental income through the platform.

“The ordinance under consideration would violate the privacy of thousands of visitors who rely on home sharing to affordably travel to Madison,” Randall says. “It would also negatively impact hosts ability to earn money sharing their home and expand the accommodation offerings in Madison during peak travel times such as football games, commencement and summer travel.”

The ordinance was referred to the Plan Commission’s meeting on February 24th so city staff has time to amend the ordinance.

The ordinance will also go before the Board of Health for Madison and Dane County on Wednesday, and the Plan Commission will hold another public hearing next Monday. 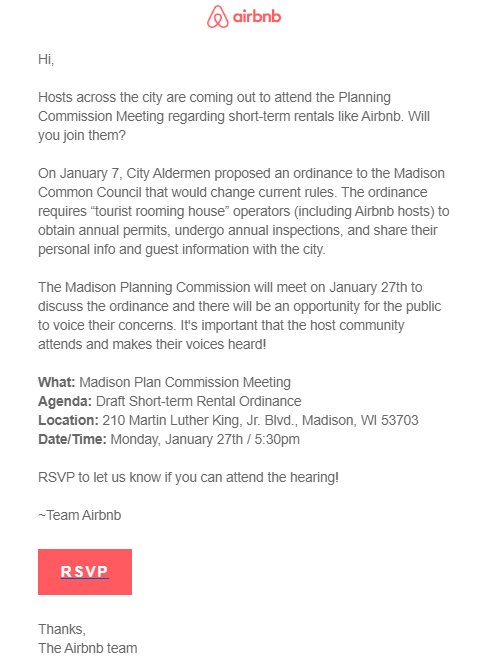 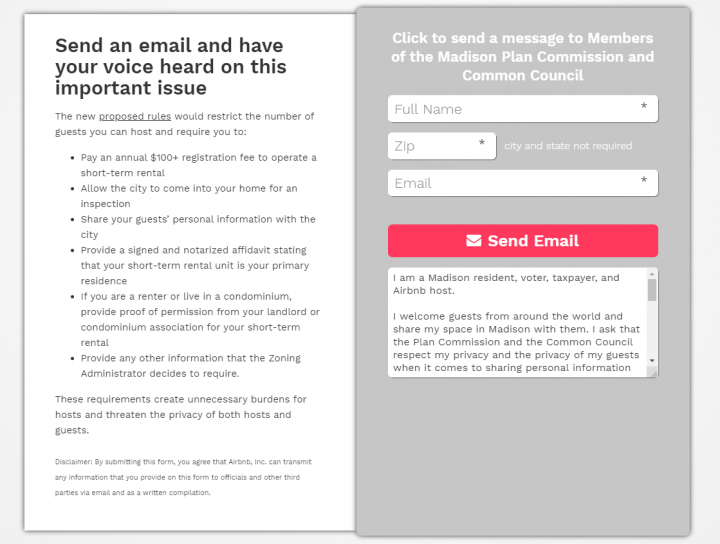