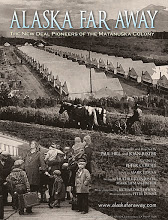 On Tuesday, May 7th interim host John Quinlan spoke with filmmaker Joanie Juster, director of “Alaska Far Away”. Joanie Juster is known for her work in Madison through protests and rallies in the capital, and attributes this work to a love of the Midwest. Her film chronicles the history of the New Deal within the Midwest and the farm families who left this area to travel to Alaska. Joanie Juster discussed her inspiration for and the process of creating the film. She also discussed the push to publicize the importance of this historical event and it’s current broadcasting on public television stations around the United States.

“In the midst of the despair of the Great Depression, Franklin Roosevelt’s New Deal gave over 200 struggling Midwestern farm families an extraordinary opportunity: the chance to start over on the Alaskan frontier. “Alaska Far Away” tells the story of this bold government experiment, and the families who found themselves thrust into the national spotlight along the way.”

Listen to the full show: