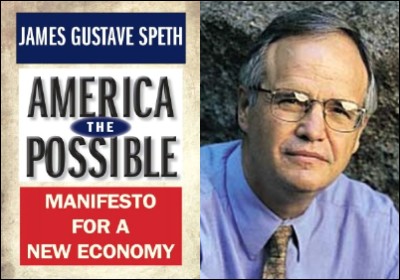 In her review of the book, Hazel Henderson wrote, “In America the Possible, author Speth focuses on the powerful role of media and advertising and how giant media conglomerates now influence education on public issues and shape opinions and politics – now so evident in the U.S. presidential election of 2012. Unlike in most other mature democracies, U.S. politics, flooded with money, feeds mass media profits with millions of attack ads – in absurdly long, tedious campaigns with politicians now spending more than a third of their time “dialing for dollars” from rich special interest contributors… America the Possible is exhaustively researched and contains all the elements needed to foster a rebirth of a more realistic U.S.A. Speth sees this country once more joining the international community as a more cooperative, peaceful member, contributing to the emergence of responsible societies. Many new similar models, from the Earth Charter, Forum 2000, to the UN’s Global Green New Deal, lay out principles suitable for addressing the new issues. In our Anthropocene Age, no nation alone can address these unprecedented challenges, where weapons fail and where sovereignty must be pooled and knowledge and resources shared more deeply. This book is vital reading for policy makers and concerned global citizens from local to national, worldwide.”