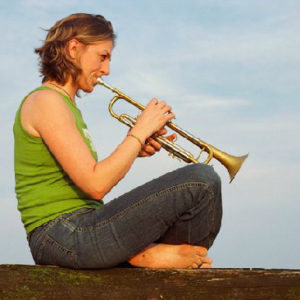 On December 4-6, 2014, the UW School of Music will host the 4th Annual UW/MMSD Jazz Festival, at which Ingrid will hold a trumpet master class and be a featured performer.

Ingrid recently made her Madison debut as a member of Terri Lyne Carrington’s Mosaic Project. She is also a member of Darcy James Argue’s Grammy-nominated Secret Society; the Juno-award winning Christine Jensen Orchestra; has been featured on Gil Evans’ Porgy and Bess at the San Francisco Jazz Festival under the direction of Maria Schneider; and has appeared as a guest in the festival’s “Tribute to Woody Shaw and Freddie Hubbard”, alongside Terence Blanchard, Eddie Henderson, Bobby Hutcherson and Kenny Garrett. Ingrid’s performances as a leader and as a featured soloist have taken her around the world from Canada to Japan, Australia, South America, South Africa, the Caribbean and to almost every country in Europe and Scandinavia.

For more information regarding this event, see the WORT calendar.