In this Earth Day edition of the Perpetual Notion Machine, we head to a remote part of the globe, Antarctica. Our guests include Matthew Lazzara, meteorologist at the Antarctic Meteorological Research Center & the Space Science and Engineering Center at UW-Madison, and also department chair of Physical Sciences at Madison College, and Ethan Koudelka, student researcher at Madison College. COVID-19 has put a hold on most research throughout the continent. The few that have ventured to Antarctica have gone through rigorous protocols and quarantines before even setting foot on the continent. So far, no one there has contracted the disease. The last time Matthew went to Antarctica was about 3 years ago.

But that doesn’t stop nature, like last February when an iceberg called A-74 broke off, or calved, from the Brunt Ice Sheet and Shelf. Calving is a normal process, although it usually takes years before a crevice to develop and expand to the point of breaking off an iceberg. However, climate change has effected different parts of Antarctica, not uniformly over the entire continent. Warmer deep water in the ocean has had more of an effect on ice shelves than warmer surface temperature. An example is the Larsen Ice Shelf on the Antarctic peninsula. Section B broke off a few years ago, and the resulting iceberg soon disintegrated. Now, Section C has formed a crevice.

This image and the Featured Image show a satellite picture of the A-74 iceberg and a size comparison with Chicago. 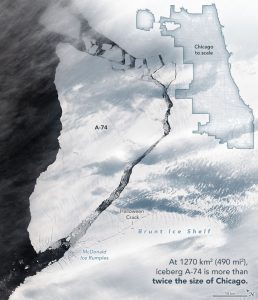 This image shows the calving and its progression on the Larsen C Ice Shelf. 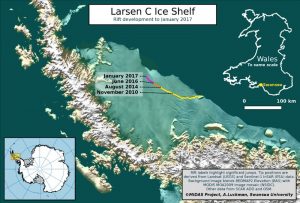