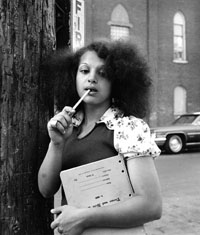 Milton Rogovin (1909-2011) dedicated his life’s work – as an optometrist, a political activist, and a photographer – to enabling people to see more clearly. Born into a Russian Jewish immigrant family in New York City, he grew up in Harlem and Brooklyn and attended Columbia University. Radicalized by the widespread deprivations he witnessed during the Depression, he dedicated himself to working for social and economic justice. After military service during World War II, Rogovin began practice as an optometrist in Buffalo, New York. He and his wife Anne were politically active, engaging in union organizing and voter registration in Buffalo’s African-American community. In 1957 he was called before the House Committee on Un-American Activities and after refusing to testify was dubbed “Buffalo’s Number One Communist.” Much of his optometry clientele vanished, and with his increased free time he turned to photography as a way to speak about social inequities. Still, he maintained his optometry practice until he was nearly seventy years.