On Monday October 15th, host John Quinlan held a fascinating conversation with guest Brad Lichtenstein, director/producer of “As Goes Janesville.” They were joined by Dane County supervisor Jenni Dye, a veteran of the WI Capitol Uprising, and a native of Janesville. 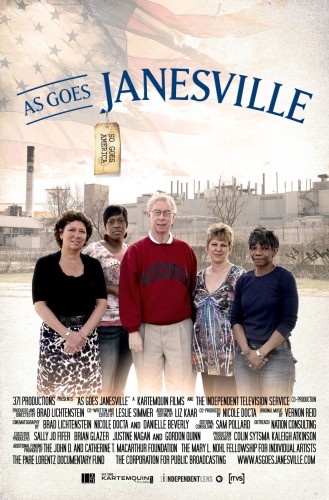 According to the film’s website, “Janesville, Wisconsin is not unlike a lot of Midwestern blue-collar, middle-class towns in America. Since the economy began its nosedive in 2008, Janesville residents, civic leaders, and businesses have been plunged into an extended cycle of hardship and uncertainty. And like other towns in other states across the nation, Janesville has found itself at a crossroads: As a place with more people than jobs, how can it reinvent and restore itself, and at what cost? … And then in 2010, the midterm election campaigns hit high gear, and perhaps nowhere did they reverberate more widely than in Wisconsin. Scott Walker, a young and fiery politician in Milwaukee, captured the GOP endorsement for governor with a platform focused on repairing Wisconsin’s battered economy and creating a quarter million jobs using deep cuts in the capital gains tax, incentives for small businesses, and rolling back spending on state spending — including measures to restrict the collective bargaining rights of public employees such as firefighters, teachers, and police officers. Walker, who gave out “Wisconsin: Open for Business!” campaign bumper stickers, was swept into office by a hefty margin, and quickly introduced his “budget repair bill” in early 2011. The bill passed, but not before the Wisconsin State Capitol in Madison was besieged by protestors and the Democratic members of the legislature (including Janesville’s representative Tim Cullen) fled the state in an attempt to block it. Meanwhile in Janesville, there is ambivalence. A pro-business agenda at the state level is a relief to the local “ambassadors of optimism.” Those who have been lifelong autoworkers and union-members are nervous about wagering hard-won labor rights for a so-far speculative economic resurgence. But everybody in Janesville is eager for something — anything — that might help them keep their community in one piece. The story of Janesville is a parable for cities large and small across the United States. In this era of economic challenge and ideological polarization, how might we redefine the American Dream?”

Read more about the film at: