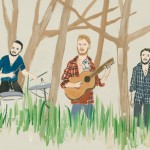 Phox, a six-piece indie pop group from Baraboo, WI, has a self-titled debut out now. Despite a growing profile and their home state’s reputation as a harbinger of hipster culture, the musicians insist that what makes them distinctly Wisconsin is their obliviousness to being cool. “A lot of us were in the marching band,” Phox frontwoman Monica Martin says. “It’s sort of a rite of passage.”