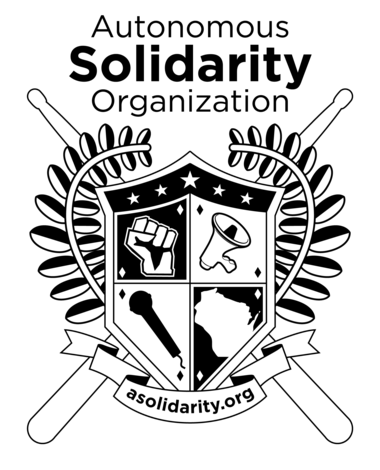 According to their website, “The Autonomous Solidarity Organization (ASO) is a community-based grassroots organization built through the friendships forged during the occupation of the Wisconsin State Capitol in February of 2011.  We believe that community is built through mobilization and education. We are a non-profit civic education organization incorporated under Ch. 181 of Wisconsin State Statutes and currently working toward formal 501(c)3 recognition.  The original core membership of the ASO was heavily involved with the three-week occupation of the Wisconsin State Capitol during the protests over the Budget Repair Bill (SB/AB 11).  Nearly none of the original members knew each other before this event.  For most of us this was our first taste of activism, while for others it was merely the continuation of years of commitment to fighting for social justice. Our membership covers a broad spectrum of age and occupation.  We are students and teachers, business owners and union members, the young and the old, the organized and the unaffiliated, but together we stand in solidarity.  As an organization we stand for accountability, transparency, and egalitarianism in order to bring about the world in which we wish to live.”