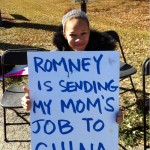 On Wednesday Oct 10, Jan Miyasaki spoke with Tom Gaulrapp regarding the outsourcing of jobs to China at the Bain Capital owned Sensata Technologies Plant in Freeport, Illinois. Protesting at Bainport, a tent city that has been set up across the Sensata Plant, Tom Gaulrapp, who has worked at the plant for more than thirty-three years, is one of many workers who is about to lose their job.170 jobs are planned to be sent to China, along with American workers training their replacements and sending factory equipment to China. The plant produces high technology automotive parts. It produces transmission sensors, parts extremely vital for the car, for a large majority of the manufacturers in the world. Now, because there are few other well-paying jobs other than those that were offered by the plant, Freeport is a town that, much like other towns in the Midwest that are facing similar situations, is suffering economically. Not only will the 170 people and their families be affected by the outsourcing of jobs, but so will the surrounding small businesses in the community: the loss of jobs will affect Freeport as a whole.

When asked to recount how and when Bain Capital decided to outsource the jobs to China, Gaulrapp explained “Sensata Technologies, formerly a division of Texas Instruments, was purchased by Bain Capital in 2006; in January 2011, Bain Capital purchased the automotive sensor division from Honeywell, after which the workers were told that their jobs would be moved to China by the end of 2012.” Workers were faced with few other options other than to remain at the plant to finish their terms. In fact, says Gaulrapp, not only did the company fail to provide the workers with adequate compensation, “they changed the severance plan, which then Sensata said they were going to match the new plan, but not the old plan… what it did for me personally, is that it cut my severance pay from 47 weeks down to 27 weeks.”

The protestors are into the twenty-ninth day of their encampment at Bainport where they are raising awareness regarding outsourcing and the dangers this poses to the economy. Attempts to prevent the move of equipment out of the factory were met by arrests by police, just one example of the resistance shown to the protestors. According to Gaulrapp, the company did set a record last year for profitability. Gaulrapp wants to show the hypocrisy of Mitt Romney, co-founder of Bain Capital – “[Romney] says he wants to get tough on China, and wants to stop the loss of manufacturing jobs to China, and here is a company that he actually he owns stock in, and is doing that to us.”

Gaulrapp said he will continue to raise awareness of this issue even past December when he loses his job, and “to hold those that make these decisions responsible… If we can save one job, then that makes it all worth it.”