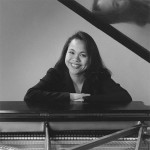 Ayn Inserto will conduct the world premiere of the composition “Ze Teach and Me” commissioned by Madison College Big Band. Inserto, who was influenced, taught and mentored by the late Bob Brookmeyer, trombonist and band leader, is a growing force in the modern big band movement. Her work twists and turns–but not quite the way your dad and mom did in big band’s hey day. Ayn Inserto will share with WORT listeners her influential forces behind her innovative approach to big band jazz and talk about the upcoming concert to be on Saturday, April 18, at Madison College/Truax campus on Anderson St. near the East side of the airport.

Listen to Strictly Jazz Sounds, as always, on Thursdays from 2-5pm on WORT89.9-FM, Madison’s community listener-sponsored radio station. Radio that’s for everybody…there’s something there for everyone. And, it’s thee place for jazz!