Musicians for WORT invades the Frequency this Thursday, May 17th at 8pm for a Block Party Warmup Show with According to What, Small Mediums, and Imaginary Watermelon. DJ Catwoman from Friday on My Mind will also be there to spin between sets. Come enjoy one of the last great rock shows at the Freq before Darwin closes the doors in June. We’ve got great door prizes too!

The night begins with the sweet and scathing fuzz pop of According to What.

Next is Small Mediums with hard rockin’  lo-fi power pop. 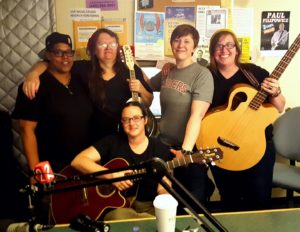 Imaginary Watermelon rounds out the night with heart-pumping alternative folk-rock (seen here at WORT with Cooper Talbot from Her Infinite Variety). They recently received 6 nominations at the 2017 Madison Area Music Association Awards, taking home the award for Best New Artist and playing as a featured musical guest. In June of 2017, Imaginary Watermelon released their debut full-length album, Swimming in Potential. With powerhouse vocals, poignant lyrics, screaming guitar licks, and an effortless groove: this mighty 4-piece puts on a great show that gives the right kind of buzz.