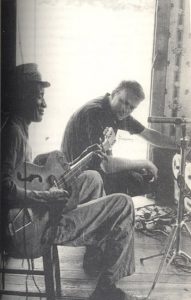 This week I’m doing a two part special on Blues Cruise and Two For the Blues featuring Samuel Charters.

Unlike other shows broadcast in this series, Sam Charters was not a blues man.  He was a historian, author, music producer and poet.  He was widely published in the fields of blues and jazz.  He wrote one of the first histories of the blues, The Country Blues which was very influential and is still highly regarded in blues literature.  In the early 1950s he began searching for Blind Willie Johnson.  Unknown to Sam, Blind Willie had died but his quest led him to many other blues musicians including Lightnin’ Hopkins.  Although Lightnin’ had recorded prolifically, he was a forgotten man when Charters rediscovered him.  His recordings of Hopkins were released on the Folkways label which led to a very active late stage career for Lightnin’.  Quite a number of country blues men were recorded by Sam Charters and without his efforts we may never have known about these talented musicians.

We owe a lot to Samuel Charters and this 2 part special will tell you why.   These shows were originally broadcast in January and February of 2006.  The show is on our station archive at wortfm.org for 2 weeks following broadcast if you miss it at time of broadcast and want to check it out.