I wrap up the blues radio specials which began with the COVID19 restrictions at the Station on March 28.  On Blues Cruise Friday night from 6-8 PM Central Daylight time the featured artist is Jody Williams.  He got his start with Bo Diddley playing on  the streets of Chicago with Bo’s band, E 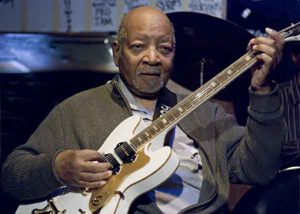 llis McDaniels and the Hipsters.  Jody did a lot of studio guitar recordings in the 1950s for other artists and was Howlin’ Wolf’s guitarist when he first came to Chicago.  His instrumental, Lucky Lou was borrowed by Otis Rush as the basis for Otis’ hit All Your Love.  It would also be used by Peter Green for guitar licks used in Black Magic Woman.  Jody also wrote the original “Love Is Strange” that was a huge hit but unfortunately, he never received credit for his efforts.  Jody became disenchanted with the music business and dropped out of performing and recording from the l960s-90s.  He re-emerged in 2000 as a bluesman and in 2002, his highly regarded recording Return of a Legend on the Evidence label brought him well deserved attention.  That’s when we caught up with him for the interview and original broadcast of this feature. (photo courtesy of WordPress.com)

Two For the Blues wraps up the radio specials on Saturday night from 8-10 PM Central Daylight time with a radio special on Bob Koester and Delmark records, a label he founded in 1950s in St. Louis.  Delmark and Bob Koester have been a major force in the promotion of Chicago blues.  His record store, Jazz Record Mart has been the best place in Chicago to find those obscure blues and jazz recordings and was a meeting place for those inte 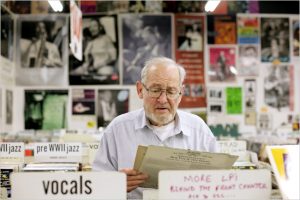 rested in this music.  A number of other record label entrepreneurs got their start at JRM including Bruce Iglauer (Alligator) and Michael Frank (Earwig).  Charlie Musselwhite worked at the store for a time.  I caught up with Bob Koester for an interview which led to this radio special just prior to the 50th anniversary of Delmark.  Delmark recorded a Who’s Who of Chicago blues including Junior Wells, Magic Sam, Luther Allison, Big Joe Williams, Lurrie Bell, and Johnny B Moore to name a few.  Bob sold the label in 2018 but continues to run his record store now located on Rockwell St in Chicago.  Both radio shows will be available on our station’s archive fof 2 weeks following broadcast.  We return to regular programming next week with Dave Watts producing Blues Cruise and Art Schuna doing Two for the Blues.