A look at the music of the northeastern Brazilian state of Pernambuco.

A multi-part series showcasing the music of this region with the styles of: maracatu, forro, cocu and more. Check out our first installment on Maracatu, a Brazilian musical genre that has its origins as a cultural resistance to slavery.

We talk with Scott Kettner, a New York-based musician and scholar who has researched extensively the music of Northern Brazil. Scott is organizing the North American tour of Estrela Brilhante, a traditional Maracatu Nation that has been playing since 1906. Estrela Brilhante will be joining Nation Beat on a tour of the United States. For tour details and information about both bands check out:

For a link to their kickstarter campaign: www.kickstarter.com/projects/870885596/a-tale-of-two-nations-featuring-maracatu-estrela-b 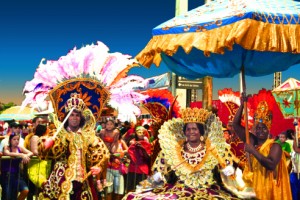 photos courtesy of the Tale of Two Nations tour.

The music heard in this episode:

Thanks to Scott Kettner and the staff colective at WORT 89.9 FM, Listener Sponsored Community Radio in Madison, WI