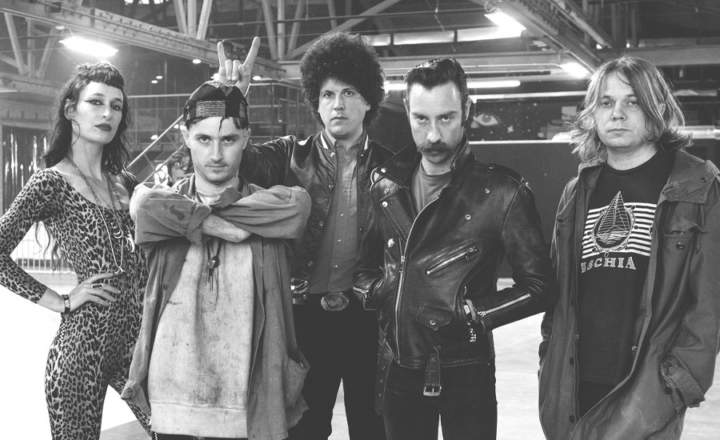 The story of the Black Lips began in Dunwoody, Georgia, a quiet, conservative suburb of Atlanta, in the year 1999. Born of a mutual love of Link Wray, The Stooges, and The Ramones, and sealed through a shared dedication to defiance, the band formed after childhood friends Jared Swilley and Cole Alexander were kicked out of Dunwoody High for separate, yet equally bad, behavior. The former classmates took their love of music and restless energy and channeled it into their newly found free time, and joined by friends Ben Eberbaugh and Joe Bradley, the Black Lips started playing shows around Atlanta, at house parties and bars. They spent this time honing their sound – garage rock infused with blues, psychedelia, and punk, plus a healthy dose of reckless abandon – and released their first 7-inch, “Ain’t Coming Back,” in 2002 on Die Slaughterhouse records (named in homage to the flophouse den they called home). Shortly before the band was set to head out on their first ever national tour, Eberbaugh was tragically killed by a drunk driver. Devastated but determined to carry on in Eberbaugh’s honor, the Black Lips hit the road as a trio just a few days later.

It’s been 15 years, but that passionate dedication to touring has never left the band. The Black Lips have released eight full-length albums since that first tour, and have traveled the country and the world extensively, making a name for themselves as an electrifying, must-see live act. It helps that the same mischievous spirit that helped speed up their exit from the educational system is still very much alive, thriving in its new environment on stage, resplendent with punk rock theatrics and miscellaneous bodily fluids, amongst other things. The band’s energy and unique “flower punk” sound helped them build a rabid fan base, and after releasing their first two albums through Bomp!, they put out the critically celebrated Let It Bloom on In The Red records. This record garnered the Black Lips features in Spin and Rolling Stone, and they were soon signed to Vice Records, subsequently releasing Los Valientos Del Mundo Nuevo, an ambitious album recorded live at a bar in Tijuana, Mexico, in February of 2007.