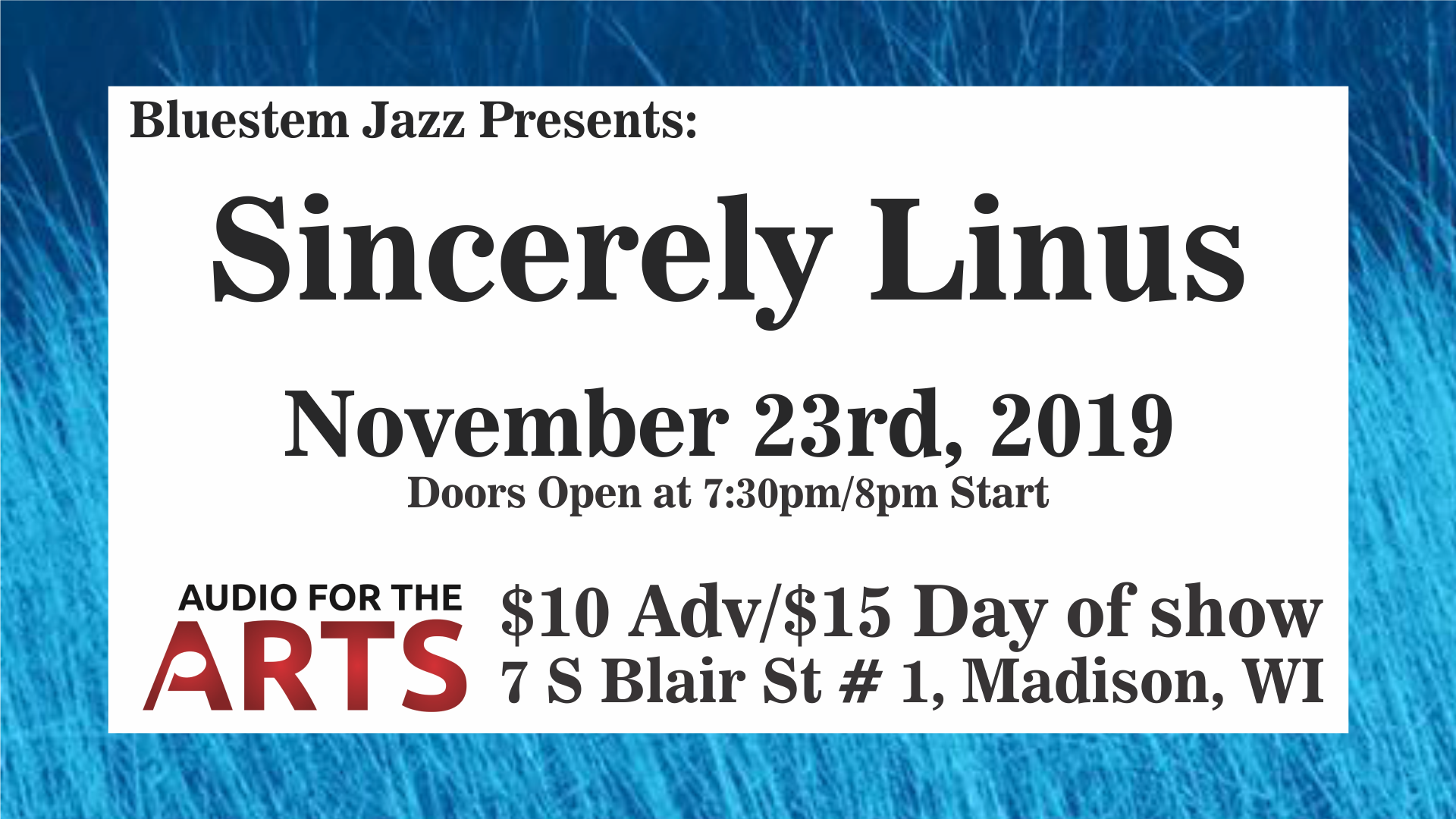 —————————————————————
Sincerely, Linus is a modern music ensemble led by musician/educator/percussionist Jake Polancich. Informed by jazz, classical, rock, avant-garde, and electronics, the group balances original, covered, and improvised compositions with a nod to the past and an uninhibited exploration of the present.

Ryan Meisel – saxophones
I am a musician, educator, saxophonist and multi-instrumentalist. My ensembles consist of original, strait-ahead, modern jazz with the “Meisel Music” duos, trios, quartets and the larger band called the Meisel Music Collecitve. “Montauk Project” is my creative music duo with drummer Jake Polancich, and “Two Owl Song”, a spiritual ensemble co-lead with my wife Celia, featuring music for the earth and humanity. I teach music at New Berlin Eisenhower Middle and High Schools and bring the community together hosting open mic sessions in Hartford and Milwaukee.

Jay Mollerskov – guitar
Jay Mollerskov is a guitarist/composer from Racine, WI. He has been an active educator and professional performer in Milwaukee and abroad for over 20 years and holds a degree in Music Composition & Technology as well as an MM in Music Performance from UW-Milwaukee. He currently teaches privately at Lincoln Music House.

Matt Rodgers – bass
Matt Rodgers is one of those bassists that has the ability to play any style of music you throw at him, and his versatility has led him to play with more groups than can be named here. Rock & Pop, Jazz & Gypsy swing, to Latin & Afro-Pop, he has played them all. Having personally received instruction from Jazz legend Richard Davis, Rodgers can move easily from playing funk grooves on his electric bass, to thumping out mellow lines on the upright.

Jake Polancich – drums/leader
A musician and educator based in the Milwaukee area, Jake Polancich is the director of bands and music teacher leader at Arrowhead High School (Hartland, WI) where he oversees all aspects of the program including 4 concert bands, 2 jazz ensembles, marching band, percussion ensemble, and teaches Music Theory. As a drummer and percussionist, his most recent projects include performance/recording dates with the Ryan Meisel QuArtet, Montauk Project, and his newest project Sincerely, Linus. He has performed and recorded with numerous bands and ensembles throughout the United States, Canada, England, Ireland, Italy, and the Republic of China. He continues to serve as a performer, conductor, presenter and adjudicator for various festivals and concerts. Jake is a proud endorser of DREAM Cymbals and Pork Pie Drums. For more information, follow Jake on Twitter @jpolancich or visit www.jpomusic.com