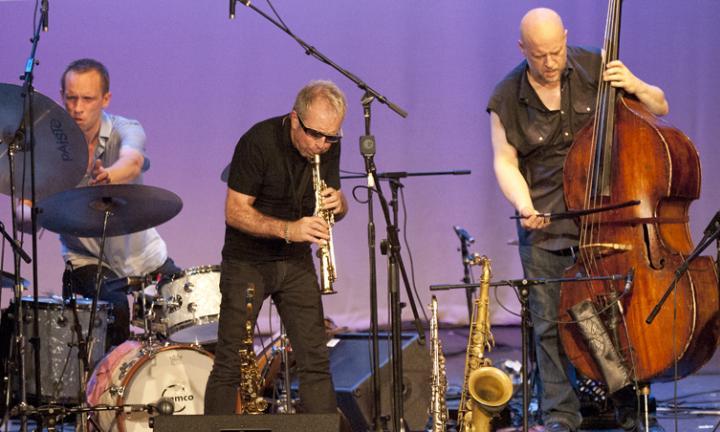 “On Saturday, March 23, 2019 at 8pm, ALL presents Boneshaker featuring Mars Williams (reeds), Kent Kessler (double bass) and Paal Nilssen-Love (drums). Tickets are $20 in advance at https://boneshaker.bpt.me and $25 at the door. Student tickets are $5 off with valid school ID. Advance tickets are available online until 1 hour before the show. Doors open at 7:30pm.

Boneshaker was established some 7 years ago when the three met for a handful of concerts and recording sessions around the Chicago area in early January 2011. The three musicians knew each well through various bands like Hal Russel´s NRG ensemble, Peter Brötzmann´s Chicago tentet, Territory band and had since 2002 wanted to do something together.

The trio’s two albums are released on the Austrian label Trost and received brilliant reviews in international press such as The Wire, Downbeat and more.

The trio toured North America in spring 2014, winter of 2016 and also Europe in 2016. The trio has done sporadic concerts in the Chicago area from time to time but this is the first longer tour of the US; March-April 2019. They will also have a brand new CD out by then.

The trio’s music remains free improvised, but with clear roots to the American tradition of free jazz. Although all three members are influenced by European improvised music as defined by the English, Dutch and German players of the mid sixties, the three share broad interests in music traditions from all over the world and appreciate when influences are let loose.

A few words about the musicians: Mars Williams, quite an open-minded musician, composer and educator who commutes easily between styles like free jazz, funk, hip hop and rock. Mars has recorded and toured with a broad array of bands and musicians; such as Billy Idol, The Psychedelic Furs, Peter Brötzmann Chicago tentet, and Hal Russel´s NRG Ensemble to name a few. Kent Kessler was also part of the NRG Ensemble and in the early 1990s, he became a frequent member of Ken Vandermark’s many ensembles and also a member of the Chicago tentet. Kessler is a strong bass player who is one of the few who continue in the style of Fred Hopkins, Harry Miller and Johnny Dyani. Paal Nilssen-Love has established himself over the last decade as one of the most important voices in improvised music from his generation. A powerful drummer of unbounded energy, he shows an ongoing ability to break physical and musical boundaries on his continual hunt for new collaborations and experiences.

This is a very exciting and much welcome blast of old school free jazz energy from a collective group featuring Mars Williams on saxophones, Kent Kessler on bass and Paal Nilssen-Love on drums. Each has deep experience on the outer fringes of the jazz scene and they make for a very cohesive and potent unit.