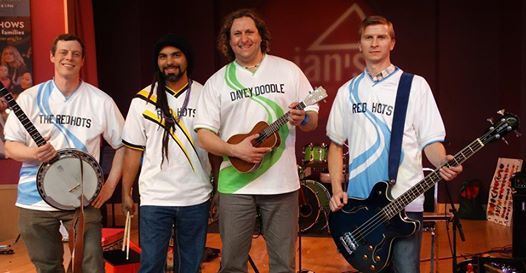 5 years ago Kraig and I started a music project aimed at family fun kindie music, I started to write songs about my nieces and nephews, and once I had my daughter April and started performing weekly at Cultured Kids Daycare, I focused on forming a the band Davey Doodle & the Red Hots and self recording my first album called Jumping Town. Jumping Town album has 13 all original songs written and performed on my collection of instruments. Songs tell a story, and there are songs about my loving dog Truffle Doodle, fun things that kids do, and songs about being a parent. Kraig and I started playing in his garage, and when we played a new song called Scoot Scoot Caboose one evening as all his kids were going down for bed and all the windows were open on a hot summer night, we knew we were on to something magical and found a drummer named Chris Barry, and walah, we formed Davey Doodle & the Scoville Unit (since we all really love hot chili peppers). Kids were confused about the Scoville Unit thing, so we switched to Davey Doodle & the Red Hots. We brought in the talent of Dylan Heckman on bass guitar, and climbed to the top of the kids stage by performing for 1,000s at the Overture Centers Kids in the Rotunda series in our home town of Madison, WI. We continued to write more songs and bring our unique super engaging creative performance style to venues in the Midwest. A few band members have changed over time, and now with Peter Johnston on drums, and Jeremy Holmstadt on the bass, Kraig (Banjo) and I are ready to bring our music to the world stage. I (Davey Doodle) had to move 6 years ago to the Twin Cities, MN and now have expanded our music and fanbase throughout the Midwest. We have completed are recording in a real great studio of our next album “Pop Snap Party”, which is set for nationwide release on 11/29/2019! This album will be the best one yet, and even have a new song about SLIME representing a new musical genera I invented called UkaJop that fuses Ukulele, Jazz, and Hip Hop and feature a guest appearance by famous hip hop artist Rob Dz. This album will delight your ears, and get you dancing to the musical party of Davey Doodle and the Red Hots, we know you will enjoy. Look for us to have album release shows in 2019-2020 throughout the world, and who knows where else in the world this will bring us.