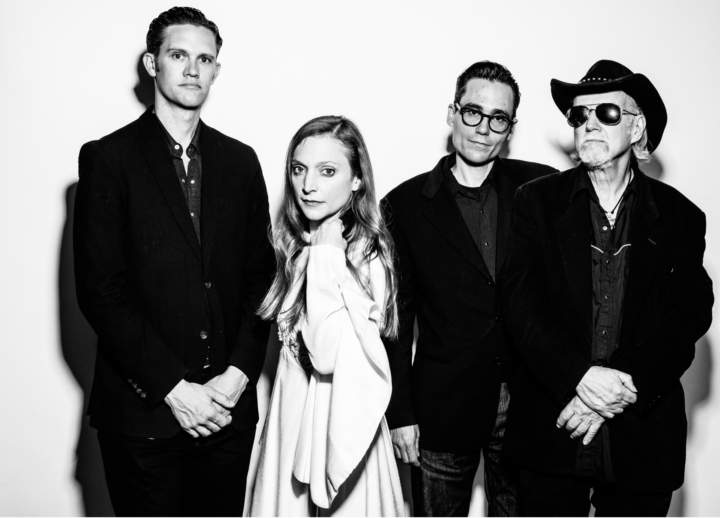 BOISE, Idaho — Eilen Jewell laughs when told her label’s president called her a musicologist. But she confirms she and her husband and bandmate, drummer Jason Beek, have a passion for studying American music.

“We really love to uncover the past. It’s almost like digging for buried treasure,” she says. “For me, that’s where music is at. I like all kinds of music as long as there’s the word ‘early’ in front of it.” For her new album, Down Hearted Blues, released Sept. 22, 2017 on Signature Sounds, she and Beek unearthed 12 vintage gems written or made famous by an array of artists both renowned and obscure, from Willie Dixon and Memphis Minnie to Charles Sheffield and Betty James. Then, like expert stonecutters, they chiseled them into exciting new shapes and forms, honoring history while breathing new life into each discovery.

Known for what allmusic.com describes as a “country-flavored and blues-infused version of contemporary folk (which also can include healthy doses of rockabilly and surf),” Jewell’s discography includes several albums of original material and one of Loretta Lynn covers. Jewell has also recorded two albums with her eight-piece gospel-group side project the Sacred Shakers. But this latest effort, which she and Beek co-produced, with engineering by pianist/banjo player Steve Fulton and Pat Storey, is her first collection of blues — despite the fact that she credits the genre for igniting her musical curiosity in the first place.

That’s because, even though she’s dreamed of recording a blues album since discovering Howlin’ Wolf as a Boise, Idaho, teen, Jewell had to convince herself she could — and should.

“I’ve always had this sense of self-doubt about it,” she admits. “Like, who am I to sing the blues? I’m a white girl from Idaho. I don’t know if I have a right to do that.” But she also remembers an old friend’s advice: “Everyone has the right to do what they love in this world, regardless of who they are and what background they come from.”

Finally, she tired of waging her internal battle and decided to let the “do what you love” side win. It was a wise choice — particularly because she’s hardly appropriating or imitating anyone’s style; on the contrary, Jewell makes each song her own, while paying homage to her beloved inspirations. It also should be noted that American blues music, like its country of origin, is a melting pot of influences, and that all music evolves from what came before — and that, by recording these songs, she’s helping to strengthen the legacy of those who created and popularized them.

Some of them she heard while listening to her husband’s Radio Boise show, Spoonful. The pair also cite John Funke’s Backwoods, on Cambridge’s WMBR-FM, as a source of discovery. In fact, the couple’s mutual attraction to musical obscurities led directly to their relationship. A friend who knew of their common interest made the introduction, correctly guessing they’d hit it off.

That happened in Boston, where Jewell lived for nine years after leaving Boise to attend college in Santa Fe, New Mexico, then migrating to Los Angeles and finally, to the East Coast. Jumping into Boston’s roots-music scene, she began hunting for a guitarist. Beek pointed her to Jerry Miller, a bona-fide Boston legend known for his versatility. They’ve been playing together ever since; she chose some Down Hearted Blues tracks, such as “Crazy Mixed Up World,” a Dixon tune recorded by Little Walter, and Albert Washington’s “You’re Gonna Miss Me,” to showcase Miller.

On the latter, his notes bend around her supple, dramatic minor-key vocals, which slide in after a punchy sax and bass intro. Jewell, who titled a previous album Queen of the Minor Key, says its “scary, creepy” tone fit right in with so many songs they’ve done, it already felt like an old friend the first time she heard it. That horn, by the way, comes courtesy of Curtis Stigers, a fellow Boisean who had several soul hits before segueing into jazz. A fan who pumps her music through the PA before his own shows, he also sits in with her band when they’re both in town. (Jewell and Beek moved to Boise in 2012 to be closer to her family and start their own.)

“He played with us at a local festival and we loved what he did so much we asked him, very spur of the moment, to come to the studio and record with us. He literally dropped what he was doing and said, ‘I’ll be there in 15 minutes,’” she recalls, marveling about how he created a horn section with overdubs — chartless, on songs he’d never heard.

He’s also on “You Know My Love,” another Dixon tune popularized by Otis Rush. Jewell’s torchy rendition emphasizes its spooky message: “You think you’re gonna get on with your life, but there’s this thing between us that will never die; it’s always gonna come back and haunt you.

Laughing, she says, “I can definitely attest to that being a real thing in life.”

Other picks, such as Dixon’s “You’ll Be Mine,” have a more personal connection. She came to it through Howlin’ Wolf, whom she found while rooting through her dad’s garage-stashed album collection. The minute she heard him, she says, “I knew what I was supposed to be listening to.”

By then, she had absorbed the classics — Hendrix, Janis Joplin, the Doors — and noticed her favorite rockers had something in common: they were influenced by early blues artists. Down the rabbit hole she went, finding Bessie Smith, represented here via the Lovie Austin and Alberta Hunter-penned title tune Smith turned into a hit, then Memphis Minnie (“Nothing in Rambling”) and “Big” Maybelle Smith (“Don’t Leave Poor Me”).

“I’m always drawn toward anything that women accomplish in the musical world, especially of previous eras,” Jewell says. “It was amazing that women could do anything back then, when it was so frowned upon.”

Jewell, who also plays guitar and Hammond organ on these tracks, claims she’d be happy singing nothing but Big Maybelle songs — if they weren’t such a heavy vocal workout. On the propulsive “Don’t Leave Poor Me” she practically dares her voice to leap up high and swoop down low before stepping aside for the pulsating guitar-and-percussion bridge.

Her easy glide from note to note on the back-porch picker “Nothing in Rambling” contrasts with that style — and with lyrics expressing the difficulties of life on the road (a life that now includes daughter Mavis, already a world traveler at age 3) — further highlighting the smooth/raw dichotomy inherent not only to this album, but the genre itself.

While Jewell doesn’t exhibit whiskey-scratched vocal tendencies, she can certainly make a gutbucket lose some splinters — or beguile with silky sexiness. It’s as if she’s doing a one-woman play, slipping into a different persona with each song — a feat that becomes even more impressive when she reveals these tracks were recorded in only two days, live, and that Miller and upright bass player Shawn Supra hadn’t even heard some of them beforehand. That’s how spontaneous it actually was. They just happened to book some studio time during a free day in Boise, and had so much fun playing these songs they decided to make an album.

“It really felt serendipitous, like what was supposed to happen was happening,” Jewell says. “I finally gave myself permission to do what I wanted to do, and the universe supported me.”