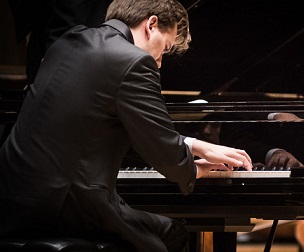 Since classical music from Poland has been rarely performed in concert halls in Madison, this recital will be a rare occasion to experience Poland’s musical heritage and diversity

This event also commemorates the 100th anniversary of Poland regaining independence at the conclusion of WWI, after 123 years of its partition and disappearance from the map of Europe.
Please join our local Polish community in celebrating this joyous occasion through the appreciation of beautiful and captivating music from some of the Poland’s most important composers.

This event is organized by the Polish Student Association of UW-Madison and Mad-PolKA Productions in cooperation and with financial support from Lipinski Fund and Polish Heritage Club – Madison, WI as well as Sounds and Notes Foundation from Chicago.
Thanks to all the sponsors and community support, this concert is FREE and open to the public.

About the performer:
Prof. Igor Lipinski is a Poland native, currently teaching at the University of Oklahoma.
Dr. Igor Lipinski at the age of 12 won a Grand Prix at the Paderewski Piano Competition for Young Pianists in Poland.
He is a musician, piano teacher, performer and also a magician, sometimes surprisingly combining all of his interests together during his performances.
He received a Doctor of Musical Arts in Piano Performance from Northwestern University and since then has performed over 100 concerts solo and with orchestras all over the U.S. This will be his first performance in Madison, WI.

Fryderyk (Frederic) Chopin (1810-1849) – born in Poland, but also composed and performed in Germany, Vienna and France. Probably the most prominent Polish composer as well as pianist and performer. Chopin’s inspiration came in big part from the Polish village music of the Mazovia region which resulted in him composing 57 mazurkas – one of his most beloved type of compositions. He also wrote numerous polonaises, concertos, nocturnes and sonatas.

Karol Szymanowski (1882-1937) – part of “Young Poland” group of composers at the beginning of 20th century. Szymanowski composed operas, ballets, sonatas, concertos, song cycles and string quartets. Many of his compositions were also inspired by Polish folk music including the famous ballet Harnasie based on the culture of Polish highlanders which he experienced while living in Zakopane.

Ignacy Jan Paderewski (1860-1941) – was a remarkable figure in Poland’s turn of the century history. He was a pianist, composer, statesman, politician, philanthropist, actor, businessman, patron of arts and architecture, winegrower and humanitarian. As a pianist, he was praised for his interpretations of the music of Chopin, Liszt, Bach and Beethoven. He successfully toured western Europe before eventually setting off for the USA. Starting with his first 1891 tour he crossed the US about 30 times in his 50 year career. He was a very popular performer and a charismatic one as well as somewhat extravagant, which eventually resulted in the “Paddymania” phenomenon. As a composer, he was influenced by F. Chopin and wrote sonatas, concertos, polonaises, Polish dances and symphonies as well as mazurkas, krakowiaks, minuets and even one opera. He also relentlessly supported and lobbied for Poland’s independence as WWI unraveled. He was a very influential figure and was heard by US politicians. He had a crucial diplomatic role in Poland’s regaining its independence.

Grazyna Bacewicz (1909-1969) – violinist, pianist, teacher, writer and composer was one of the few female classical music composers at the time in Poland and in the world. Thanks to a generous grant from Ignacy Jan Paderewski she was able to study music in Paris. She composed numerous concertos, string quartets, sonatas and  symphonies.