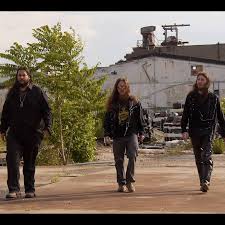 Glostik Willy is the life support for the Rock and Roll many thought was dead. Their new album titled “Hippy Metal” is due out next Spring and includes cameos by Doug Wimbish (Living Colour), Daru Jones (Jack White Band), Steve Sweeny (ekoostik hookah) and mastered by Chris Lord-Alge (Black Sabbath, James Cocker, Bruce Springsteen). The band was formed in early 2008 by Jameson “Jay Moe” Bradford (guitar), his brother Ralf Mowf (drums) and childhood best friend Buddha Aguilar (bass).  At the time, the boys were already five year veterans of the Midwest Music scene, having started their first band together at age 12. “…Unique and talented….” declares JamBands.com.  “…Astounding performance (and) scorching hot….” writes MusicFestNews.com.  “(Glostik Willy has) earned a dedicated fanbase with their original brand of edgy jams.” states LiveForLiveMusic.com.

Since then, Glostik Willy has grown to be a driving force in the Midwest Jamband scene, bridging the gap between rock and jam and forming their own genre of music that can only be described as “Hippy Metal”.  To date, Glostik Willy has logged over 700 performances in more than 25 states and 2 countries.  The band has hosted eight Midwest music and arts festivals, including their 5 Annual signature Willy Fests and performed sets at over 70 festivals around the country. “This band is a good old, down and dirty rock and roll machine. These guys blew me away…!” exclaims Buckeye Music Magazine.  “An insanely manic band!” writes MusicFestNews.

Glostik Willy continues to thrive on the road spreading their love for music to anyone with an open ear.  Their mission is to create an experience that will change the world by entertaining any and all walks of life, bringing fans, friends, and family together to enjoy and value art, love and music. To that end, they have pioneered a fan-centric method of touring in which they regularly ride along with van-loads of followers, have dedicated time and effort to supporting notable social causes in their hometown of Marion, IN, and seek to include a variety of creative expression at their shows (including visual arts, performance art, poetry, fire-spinning and flow arts). “The originators of “Hippy Metal,” the band truly knows how to shred. …The Indiana trio has built up a huge fan base (for) these blistering displays of rock n’ roll power.”  states TheUntz.com. “These guys know how to lay it down! Bring some ear plugs and prepare to rock out!”, raves The Dayton Music Insider.