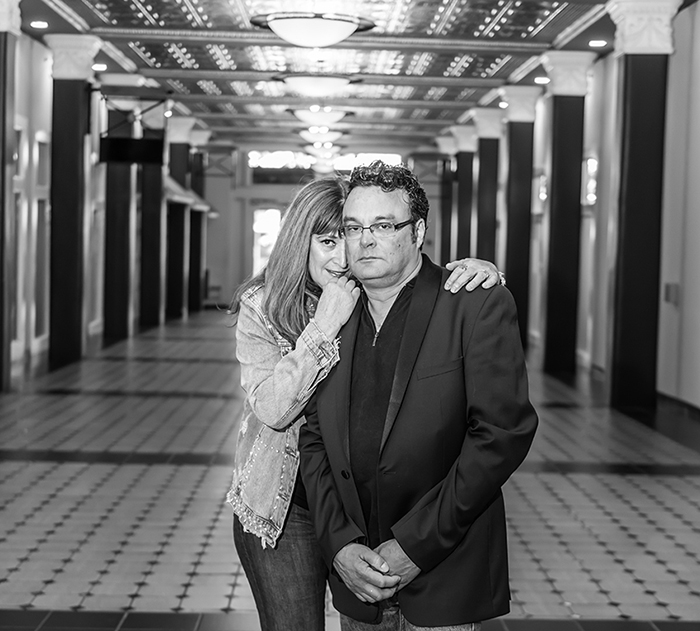 Juliet Simmons Dinallo and Michael Dinallo are following in the rich tradition of Nashville husband/wife musical duos – Johnny Cash and June Carter Cash, Susanna and Guy Clark among others. They are currently touring together supporting Juliet’s new album Dream Girl.

“Juliet Simmons Dinallo draws on a variety of influences – Shelby Lynne, Dusty Springfield and Emmylou Harris all play out among them – but given her sweet caress and compelling stance, it’s all but impossible to think of anyone other than Dinallo herself when listening to this utterly alluring album. In short, consider this an album for the ages.”- Lee Zimmerman, Country Standard Time

Singer-songwriter Juliet Simmons Dinallo – Boston Roots and Cowgirl Boots. All the way from Nashville to Memphis, and beyond, Dream Girl is the evolution of Juliet Simmons Dinallo’s singing, songwriting, and journey that began with 2013’s No Regrets on Tree-O-Records. Born in North Carolina, Juliet grew up in Maine and came of age as a musician in Boston. Juliet studied music at the Berklee College of Music, where she landed a spot on the world-renowned Berklee Gospel Choir. She recently moved to Nashville, and these experiences have influenced her songwriting, singing and performance style, giving everything she does a unique expression.

“The only question is why has it taken multi-talented Michael Dinallo 30 years to finally come out with a debut? Crooked Road Songs is, in a word, spectacular. The man knows how to put a record together. He’s done so producing Eddie Floyd on Stax and the Charlie Rich tribute album last year, both projects brimming with ideas, alacrity and total joyousness. Rock on, dude. I’m a fan.” – Mike Greenblatt, Goldmine

Producer-guitarist-songwriter Michael Dinallo grew up in Ohio then moved to Boston to attend Berklee College of Music. As bandleader for The Radio Kings, who made two records for Icehouse Records in Memphis (including Live at B.B.King’s), and The Mercy Brothers, he has traveled the world. Turning to producing artists in the early 2000’s, Michael has produced Norwegian singer-songwriter William Hut’s gold and platinum awarded album Nightfall along with two number one singles for Universal Music Group. He continued his affiliation with Memphis by producing Eddie Floyd’s return to Stax Records Eddie Loves You So and Feel Like Going Home: The Songs of Charlie Rich for the Phillips Family and Memphis International Records. His most recent project is Juliet Simmons Dinallo’s Dream Girl on BFD/Sony RED. Since relocating to Nashville, Michael has started the popular musical revue Crooked Road Songs (based on the idea of his 2017 EP Crooked Road Songs on Black Rose Records) and received Best of 2018 honors in The Nashville Scene.