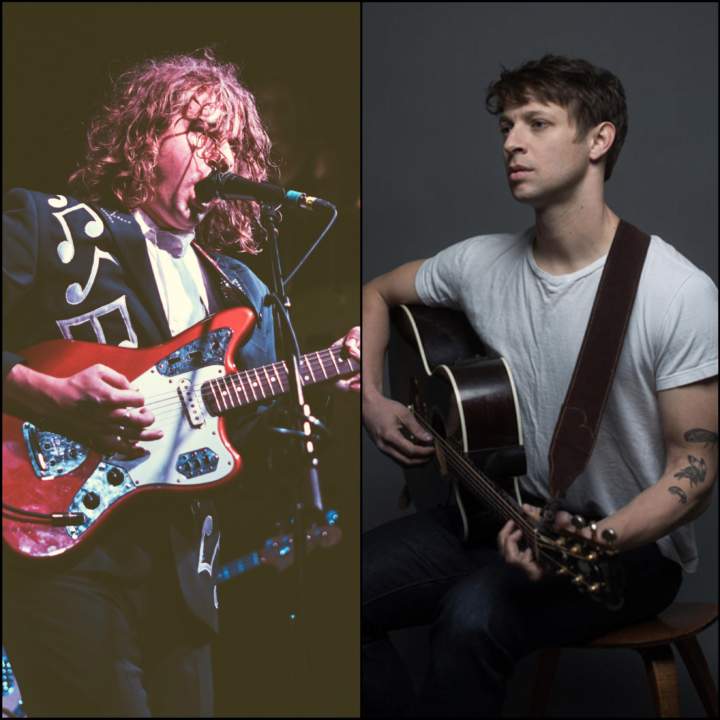 City Music is an airplane descending over frozen lakes into Chicago. City Music is riding the Q Train out to Coney Island to smell the ocean and a morning in Philadelphia where greats cranes
reconfigure the buildings like an endless puzzle. City Music is a quiet afternoon moment on a bench in Baltimore, a highway in Seattle at night where the distant houses look like tiny flames and a bottle of red wine being drained on a bridge in Paris. City Music is a bus pulling into St. Louis at dawn where the arch looks like a metal rainbow reflecting the days early sunlight….

City Music is also the new album by Kevin Morby. Full of listless wanderlust, its a collection inspired by and devoted to the metropolitan experience across America and beyond by a songwriter cast from his own mould. As he puts it: It is a mix-tape, a fever dream, a love letter dedicated to those cities that I cannot get rid of, to those cities that are all inside of me.

His fourth album, City Music works as a counterpart to Morbys acclaimed 2016 release Singing Saw, an autobiographical set that reflected the solitude and landscape in which it was recorded. It was imagined asan old bookshelf with a young Bob and Joni staring back at me, blank and timeless. They live here, in this left side of my brain, smoking cigarettes and playing acoustic guitars while lying on an unmade bed.

And now follows City Music, the yang to its yin, the heads to its tails. It is an collection crafted using the other side of its creators brain, the jumping off point perhaps best once again encapsulated by an image. Here, Lou Reed and Patti Smith stare out at the listener, explains Morby. Stretched out on a living room floor they are somewhere in mid-70s Manhattan, also smoking cigarettes. It finds Morby exploring similar themes of solitude, but this time framed by a window of an uptown apartment that looks down upon an international urban landscape exposed like a giant bleeding wound.

Morby rose to prominence as bassist in Woods, with who he recorded seven albums on Woodsist Records (Kurt Vile, The Oh Sees, Real Estate) while also forming The Babies with Cassie Ramone of Vivian Girls. Two albums and a clutch of classic singles with the latter followed. Morbys 2013 debut solo work Harlem River was a homage to New York and featured contributions from artists including Cate Le Bon and Tim Presley (of White Fence), while 2014s Still Life garnered universal critical praise. Its easy to picture Morby with a wineskin under his arm, noted a Pitchfork review. His every worldly possession hitched to his back, an
eye constantly fixed on some faraway point on the horizon.

Recording at Panoramic Studios, a central Californian home-turned-recording studio, City Music saw Morby joined once again by former The Babies cohorts Megan Duffy (guitar) and Justin Sullivan (drums). Here the vocals were at recorded night, in darkness, overlooking a Pacific Ocean illuminated only by the stars, the wash and whisper of the ebbing tidal a distant soundtrack. Six weeks of European touring had left the trio speaking a secret language that only a band can speak. The language of a musical family, explains Morby. There was an outdoor shower with no curtain and deer ran through the front yard during the meals we cooked for each other… The record was completed with Richard Swift in Oregon (producer of Foxygen, sometime member of The Black Keys).

From the widescreen opening of Come To Me Now through the bubblegum stomp of the Ramones-eulogising 1-2-3-4 (which also references late poet Jim Carrolls litany of friends lost, People Who Died), a stripped-back and wistful cover of Caught In My Eye by nihilistic LA punk wrecking crew Germs and on to Leonard Cohen-evoking closer Downtowns Lights, City Music reads like a selection of musical postcards composed and posted in the moment. It is a forensic and poetic examination of a modern America in love with the myth of itself.

At the big beating heart of these songs is the voice and conscience of the city. All cities. We see
them viewed from differing angles; from down in the gutter, and drifting up into the celestial
firmament. I am walking through a Chinatown in a major American city and now I am a guitar part taking place in my head, offers Morby by a way of a commentary for the albums inception. It falls around me like rain, dancing with the neon lights coming off of the signs of the restaurants and bars. Now I am a lamp full of hot air floating away, looking down. The city is beautiful like one million candles with different sized flames, moving in their own directions. A line finds me and grabbing it I hold on tight. I sing to myself, Oh, that city music, oh that city sound…

Here the album gives voice to the all those cities speaking the same universal language of chaos and commerce and culture. It views the city as an Oz-like experience, with your host cast as Dorothy, the Scarecrow, the Tin Man and the Cowardly Lion, a narrator by turns innocent, awestruck, fearful and fearless. Where a world once black and white is now rainbow coloured. I am a city and I have many moods, it says via its human conduit. I am dangerous and I am gorgeous. Like a proud forest made of metal and brick I am constantly changing shape, growing bigger and smaller all at the same time. I hold you but you do not hold me….

City Music. Let it hold you.

Chris Koza is a songwriter/musician living and working in Minneapolis, Minnesota, where the climate, the mighty Mississippi River and the balance of large city and rural communities offer continued inspiration.

Koza grew up in Portland, Oregon and studied piano throughout elementary school before expanding to guitar, euphonium, and theater/voice while in high school. Koza first came to Minnesota to attend St. Olaf College where he studied music theory and participated in the mens freshman choir and jazz ensemble. He began writing original songs and lyrics, and seeking a broad liberal arts exposure, decided not to pursue a music major and instead graduated with a B.A. in Studio Art (oil painting) and Philosophy.

After college, Koza began writing, recording, performing, and producing his own compositions. In 2004 he released his first solo album Exit Pesce followed by 2006s Patterns and A Friend of a Friend. These releases were met with warm critical acclaim by key critics in the Twin Cities and led to regional touring and recognition.

Koza moved to Minnesota for good in the fall of 2007, after spending the the previous six years splitting time between Portland, Minneapolis, and New York City. In 2008 he released The Dark Delirious Morning which built on the goodwill of earlier releases. With a full band, he headlined the famed First Avenue in Minneapolis and played over 150 shows regionally and nationally.

In 2010 Koza began a cycle of albums with his new ensembled Rogue Valley and performance at the historic Fitzgerald Theater in St. Paul. Beginning with the Spring release Crater Lake, Koza and the band released four full length albums in one year, each released timed for a season. The Summer and Autumn albums, The Booksellers House and Geese in the Flyway followed and the project culminated in April of 2011 with False Floors in a multimedia dance/video/music performance at the Varsity Theater in Minneapolis.

Lately, Koza has utilized his role as a musician in educational and outreach opportunities. During the winter of 2013, Koza was artist in residence and produced a performance with the Hopkins High School Orchestra. Later that year through the aid of grant funding, Koza and Rogue Valley spent a week in Koochiching County visiting schools and engaging with students before performing at the Backus Community Center in International Falls. Additionally, Koza is a regular guest musician and lecturer at McNally Smith College of Music in St. Paul and at the Institute of Production and Recording in Minneapolis.

In Fall of 2014, Koza released his latest solo record, In Real Time, and embarked on a national tour in support of his album with indie pop singer-songwriter Ingrid Michaelson.