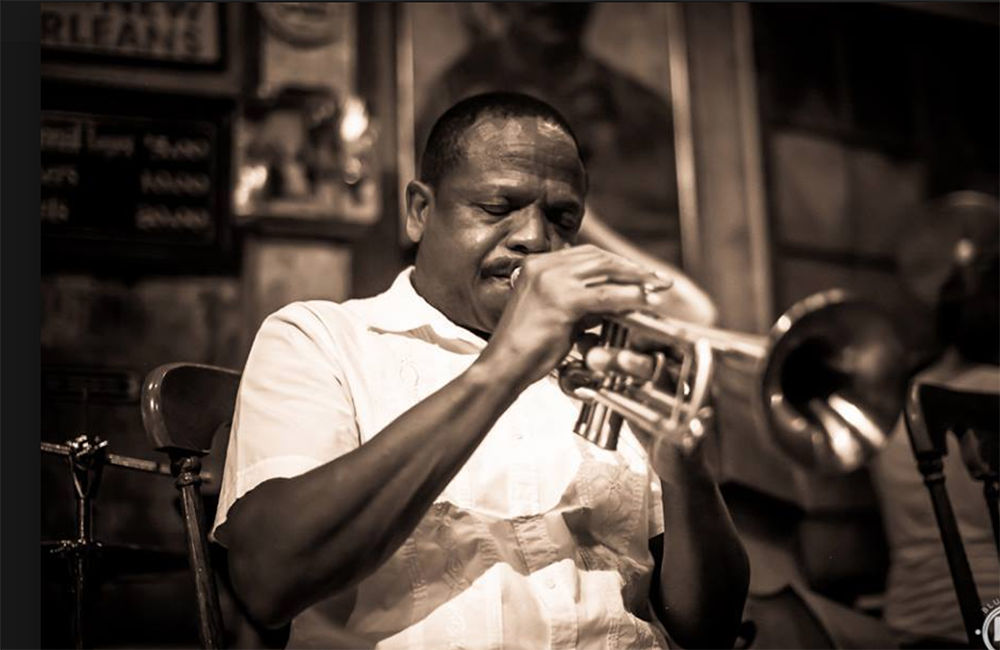 Backing Mr. Jones will be Madison musicians: Darren Sterud, Jordan Cohen, John Christensen and Dave Stoler.
The legendary jazz trumpeter Leroy Jones is known to music lovers as the “keeper of the flame” for traditional New Orleans jazz and to critics as one of the top musicians ever produced by the Crescent City.
“The mission of the Leroy Jones Quintet is to expose audiences everywhere to the authentic music of New Orleans, the music of Louis Armstrong, Buddy Bolden, Danny Barker and all the other greats who have helped create the rich gumbo that is the sound of New Orleans,” he says, “while putting our own more modern stamp on it.”
Jones himself, a native of New Orleans, whose playing has been described as a blend of Louis Armstrong and bebop virtuoso Clifford Brown, has been a critical figure in the history of New Orleans music.
A member of the New Orleans Jazz Hall of Fame, he was leader at the tender age of 12, of the seminal Fairview Band, a brass band whose alumni have included some of the best known musicians in New Orleans. It was the Fairview Brass Band which is widely credited with restoring interest in the brass band tradition of New Orleans. Today, in fact, New Orleans has more brass bands performing than at any time in the city’s history an achievement that can be traced back directly to the Fairview Band and its successor the Leroy Jones Hurricane Brass Brand.
A regular at Preservation Hall in New Orleans and a featured performer in the Harry Connick Orchestra, where his playing and singing have made him a crowd favorite, Leroy has performed on every continent and in every major U.S. city at prestigious theaters, festivals and jazz clubs like the Village Vanguard in New York City. His television appearances include The Tonight Show, Good Morning America, Late Night with David Letterman, The Today Show, Arsenio Hall, Conan O’Brien and Oprah Winfrey. He is also a regular at the world famous New Orleans Jazz and Heritage Festival, as well as French Quarter Fest and the Satchmo Summerfest.
He has also appeared on the soundtrack of the smash hit movie “Sleepless in Seattle” starring actor Tom Hanks.
Leroy has released a series of highly regarded CDs including “Props for Pops” his tribute to Louis Armstrong, “Back to My Roots,” “Mo’ Cream from the Crop”, “Soft Shoe” and “Sweeter Than A Summer Breeze”. He has appeared on numerous recordings with other artists such as Dr. John, the Preservation Hall Jazz Band, Anders Osborne, Chuck Carbo, Spirit of New Orleans, John Boutté, Lillian Boutté, Paul Sanchez, Danish Radio Big Band, Guillaume Nouaux and many, more others.
“The Leroy Jones Quintet sound sums up all those great experiences and influences,” says Leroy, “and gives me a chance each night to make sure that the great music of New Orleans is performed authentically and with great respect for the artists who came before me. Not in an old-fashioned way, but with a modern swing that comes from my love of bebop and other forms of modern jazz.”
A typical set list for the Leroy Jones Quintet includes traditional numbers like “Bourbon Street Parade,” “Sleepy Time Down South,” “Basin Street Blues,” “Do You Know What it Means (to Miss New Orleans),” “Dinah” and “When My Dreamboat Comes Home” along with his own compositions like “Soft Shoe” that are played and sung impeccably by Jones with the kind of swing that only a musician with his pedigree can deliver consistently night after night.