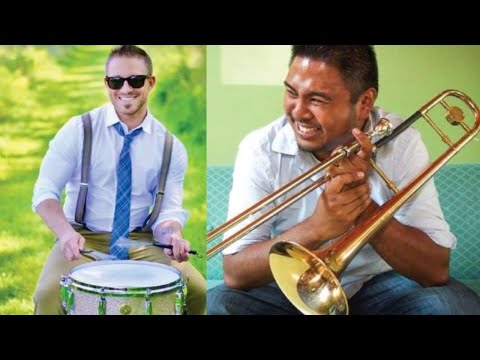 Please join Matthew Endres & Darren Sterud for an evening of high energy improvisation. Both musicians have traveled the world performing with numerous ensembles and will join together for one night only for an evening of musical expression.

Endres has performed extensively as a bandleader and a sideman in national and international venues. He is the drummer for the international award-winning group Old Style Sextet, which in 2014 placed second in the world-renowned Cotai Jazz and Blues Competition in Macau, China. He has appeared on multiple albums, including It’s About Time (2013) with the Adrian Barnett Septet; the Old Style Sextet self-titled album issued by Blujazz (2014); Chris Beyt’s 120 (2015); The Clark Gibson Studio Orchestra’s record Bird with Strings: The Lost Arrangements, issued by Blujazz (2015); The Chris Beyt Trio’s A Trio For Three, issued by Ears&Eyes Records (2020); and The University of Illinois Concert Jazz Band’s record The Music of Pepper Adams (2020). Endres also currently holds an endorsement with Bopworks Drumsticks, based in Austin, Texas.

Darren Sterud has been an active, young, freelance trombonist in Wisconsin and Minnesota since 2001. While still in high school Darren began playing and touring with Mama Digdown’s Brass Band, a popular New Orleans style group from Madison.

He went on to study music performance with Maynard alum, Steve Wiest at the University of Wisconsin-Whitewater. A gifted student, Darren played in the university Jazz Symposium, Wind Ensemble, Symphony Orchestra and Chamber Winds. He also started his own band at college, The New Tradition Brass Band.

Darren has played with other active musical groups in Madison including the Tony Castaneda Latin Jazz Band, Grupo Candela, The Jimmys and the Clyde Stubblefield Blues Band. In 2010 he was invited to perform in the Madison Mellophonium Jazz Orchestra directed by Stan Kenton alumni, Joel Kaye. He has taken the stage with several Twin Cities bands such as the Jack Brass Band, Southside Aces, Seven Steps to Havana and Charanga Tropical. Darren is always ready for a last-minute gig or an open jam session where his joy in performance shows through.

In addition to his busy performance schedule, Darren is dedicated to music education, especially the American art form, Jazz. Darren has directed the jazz groups of the UW Whitewater Band Camps and has taught classes in Jazz History and Improvisation. He has given numerous clinics on improvisation and jazz at high schools all around Southern Wisconsin. While in college, he was a highly sought after teacher for individual student lessons. With his recent ventures on the road, Darren had to put teaching on hold but now hopes to return to education. Darren is available for private lessons, band camps and clinics where he can share his passion for music and performance with students.

Cafe CODA has been preparing for our new ‘Live Streaming Initiative’. On 4/5, our pilot streaming concert was very well received. This weekend, we’ll be streaming more wonderful performances from local and regional artists. In response to the recent virus, we are taking very high measures to ensure that everyone involved in the live streaming process is working in a safe environment. We will provide masks (if requested), sanitize all high-touched surfaces with disinfecting wipes, and most importantly, maintain at least 6 feet away from each other.

We hope you’ll be able to join us from the comfort of your home. Please spread the words so more people can join in. Kindly share this email or our posts from FB, Instagram and Twitter. Our goal is to reach a global audience. In these times, why not?

Please help us spread the love and freedom of Jazz and put our beloved musicians on the map around the world!

Donations for these concerts will be graciously accepted through the following links.

No tickets purchase needed. Thank you for your continued support of live music!!