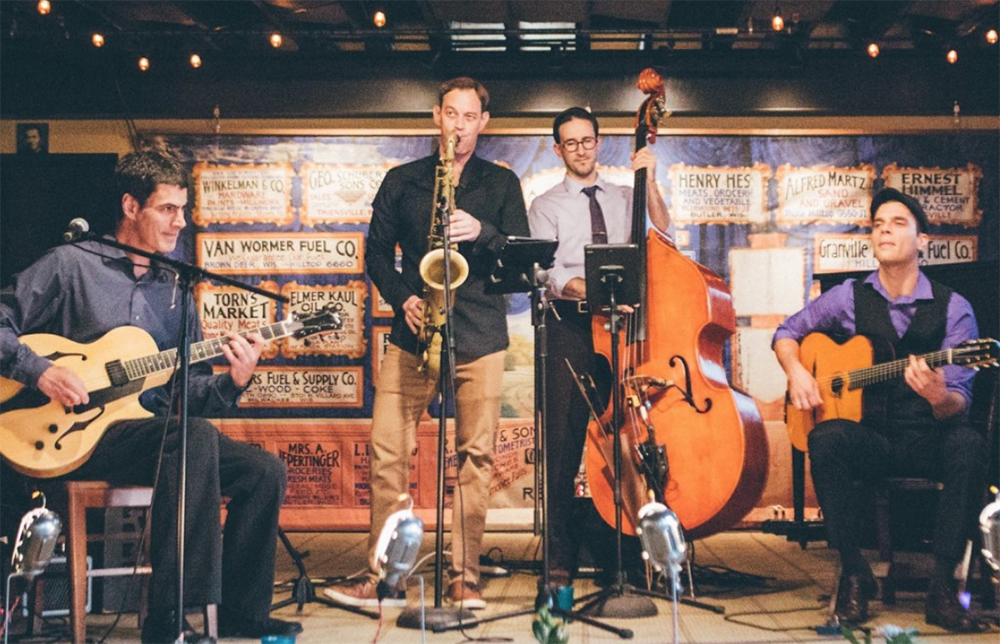 Milwaukee Hot Club plays “gypsy jazz”, the music of the late great Django Reinhardt and his modern descendants. Our music is a high energy mix of swing, bossa, and gypsy samba rhythms. Although we are primarily instrumental, vocal tunes comprise up to 30% of our set. MHC is 2 gypsy guitars, upright bass, and usually sax and/or clarinet. We perform acoustically and with amplification designed to preserve the acoustic qualities of our instruments.

Our music has been enthusiastically received at festivals, cafes, bars, and house parties and we’ve been featured in live performances on two Milwaukee radio stations. We are equally comfortable playing to a thousand or a dozen people, so let us come play for you!

The Roma (Gypsies) are an ethnic group originating from India and sharing a language (Romani) but spread throughout the world and until recently very migratory. Many of them are known by their stunning musical skills; amongst these would be Spain’s flamenco guitarists Paco De Lucia and Tomatito, brass bands from the Balkans like Boban Markovic, the Romanian string band Taraf De Haidouks, and France’s Bireli Lagrene.

The gypsies of western Europe tend to play jazz; this is due to the enormous musical contributions made by Jean “Django” Reinhardt, a gypsy living in Paris in the 30’s who was turned on to American jazz records and began to play the music, filtered through his own experience and identity. Reinhardt’s early jazz, and the tradition that has become known as gypsy jazz, is characterized by the prevalence of acoustic string instruments and the lack of drums. In this style the role of the drums is held down by the rhythm guitar’s pulsing chords, commonly known as “le pompe” (the pump). Whereas American jazz tended to feature horns and the piano, in gypsy jazz you’ll find mainly guitars, violins, and contra-bass. Horns, accordions,drums and other instruments make their appearances but are less common; piano is rare.

Many things distinguished Django’s career but it’s remarkable that he played guitar at all. When he was 18 he was badly burned in a fire which largely paralyzed the ring and pinky fingers of his fretting hand and nearly took his leg. After a year and a half he began to reconstruct a technique using mainly his thumb, index and middle fingers, to eventually become one of the greatest guitarists EVER.