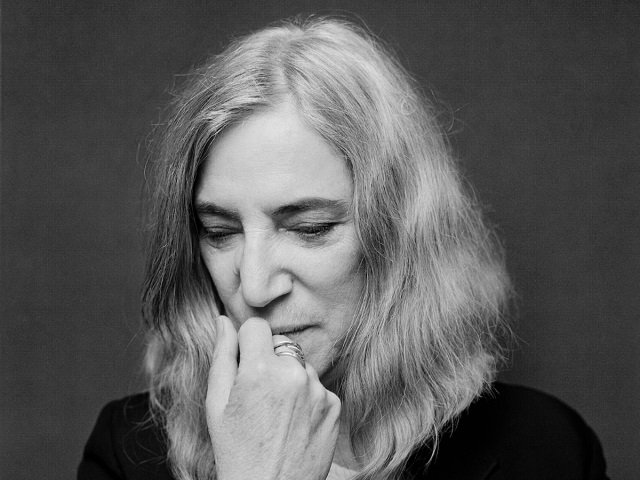 Patti Smith reads from her latest memoir “Year of the Monkey” for a webcast filmed at the Murmrr Theatre in Brooklyn.

Legendary, incendiary songwriter and author Patti Smith mixes music and readings from her most recent memoir, Year of the Monkey, in this stream of a live performance filmed at the historic Murmrr Theatre in Brooklyn. Year of the Monkey mixes Smith’s travels and her dreams in the year 2016 — a year that for many of us has continued to reverberate as a result of the presidential campaign, the ugly vibe of which also becomes inescapable in Smith’s recounting of the time. She will be accompanied for the performance by longtime bandmate Tony Shanahan. Tickets include a copy of the book.

media release: Patti Smith presents an evening of words and music celebrating her latest memoir, Year of the Monkey. This will be her only staged program of 2020.

For this one-time event, fans from around the world will be able to see Patti Smith on stage at the Murmrr Theatre in Brooklyn, where she will read from Year of the Monkey and play songs with her longtime bandmate Tony Shanahan.

This event will be filmed by acclaimed cinematographer Matthew Schroeder with a broadcast scheduled on September 4 @ 9:00PM Eastern Time.

From the National Book Award-winning author of Just Kids and M Train, Year of the Monkey is a profound, beautifully realized memoir in which dreams and reality are vividly woven into a tapestry of one transformative year—with an entirely new chapter and ten new photos.

Following a run of concerts at San Francisco’s legendary Fillmore, Patti Smith finds herself tramping the coast of Santa Cruz. Unfettered by logic or time, she draws us into her private wonderland as a surreal lunar year begins, bringing with it unexpected turns, heightened mischief, and inescapable sorrow. In a stranger’s words, “Anything is possible: after all, it’s the year of the monkey.” For Smith—inveterately curious, always exploring—the year evolves as one of reckoning with the changes in life’s gyre: with loss, aging, and a dramatic shift in the political landscape of America.

Smith melds the Western landscape with her own dreamscape. Taking us from California to the Arizona desert; to a Kentucky farm as the amanuensis of a friend in crisis; to the hospital room of a valued mentor; and by turns to remembered and imagined places, this haunting memoir blends fact and fiction with poetic mastery. The unexpected happens; grief and disillusionment set in. But as Smith heads toward a new decade in her own life, she offers this balm to the reader: her wisdom, wit, gimlet eye, and above all, a rugged hope for a better world.

Riveting, elegant, often humorous, and now with a wonderful and entirely new chapter, “Epilogue of an Epilogue,” which includes many new photos in Smith’s signature style, Year of the Monkey is a moving and original work, a touchstone for our turbulent times.

PATTI SMITH is the author of Just Kids, which won the National Book Award in 2010, and of M Train, Year of the Monkey, as well as numerous collections of poetry and essays. Her seminal album Horses has been hailed as one of the top 100 albums of all time. In 2005, the French Ministry of Culture awarded Smith the title of Commandeur des Arts et des Lettres; she was inducted into the Rock and Roll Hall of Fame in 2007.

Tickets on sale at www.murmrr.com

**Year of the Monkey (paperback) will be published on September 1st, and books will begin to ship on that date. Due to the complications with shipping during the pandemic, delivery times can be difficult to estimate exactly, and could take between 2-4 weeks, especially for international orders. Please be careful when entering your shipping information; any customer errors resulting in return-to-sender will require an additional shipping charge to re-send. Ticketing fees are included in the overall price. Your ticket includes the American, English-language paperback edition of Year of the Monkey; unfortunately, we cannot make exceptions. All books will be unsigned.

murmrr theatre – Located at Union Temple, one of Brooklyn’s leading Reform Jewish synagogues, has been dedicated to enriching the cultural life of Brooklyn since it opened its doors in 1929.