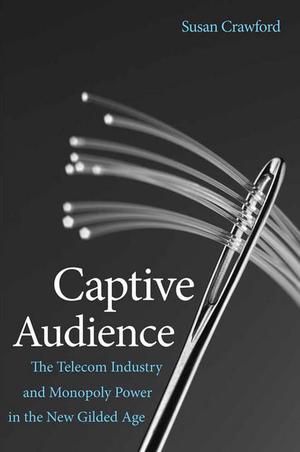 esday February 13th, host Karma Chavez interviewed author Susan Crawford about her recent book, “Captive Audience: The Telecom Industry and Monopoly Power in the New Gilded Age.” Crawford is a visiting professor at Harvard Law School and Visiting Stanton Professor of the First Amendment at Harvard Kennedy School. She has been blogging and publishing articles about telecommunications and the future of the Internet since 2003. She has served on the ICANN board of directors and was a Special Assistant to President Obama for Science, Technology, and Innovation Policy.

“Ten years ago, the United States stood at the forefront of the Internet revolution. With some of the fastest speeds and lowest prices in the world for high-speed Internet access, the nation was poised to be the global leader in the new knowledge-based economy. Today that global competitive advantage has all but vanished because of a series of government decisions and resulting monopolies that have allowed dozens of countries, including Japan and South Korea, to pass us in both speed and price of broadband. This steady slide backward not only deprives consumers of vital services needed in a competitive employment and business market—it also threatens the economic future of the nation.”