This Monday, January 18th, WORT will feature two special broadcasts honoring the life and work of Reverend Dr. Martin Luther King, Jr. In addition to related talk programming throughout the day, please join us in celebration and tribute through the following programming:

From noon to 1pm, WORT will air the 41st Annual State of Wisconsin tribute and ceremony, hosted by Dr. Jonathan Overby.

Due to COVID-19, it will not take place at the State Capitol, but rather as a pre-recorded event. The program will feature excerpts from past tributes, including author Michelle Alexander’s original speech at the 32nd Annual Tribute in 2011. WORT thanks Wisconsin Public Radio and Dr. Overby for allowing us to air this tribute.

The event will also the Madison-Dane County Martin Luther King, Jr. Humanitarian Award (honored this year are Shelia Stubbs, Lilada Gee, and Shyra Adams) and a virtual version of the MLK Community Choir, led by noted musician Leotha Stanley. This year’s MC is Angela Fitzgerald, host of Wisconsin Life on WPT. More information is available at mlkingcoalition.org. WORT thanks the MLK Coalition, and Edward Lee, Gloria Hawkins, Natalie Hinckley, and Marcus Slaton in particular for their assistance. 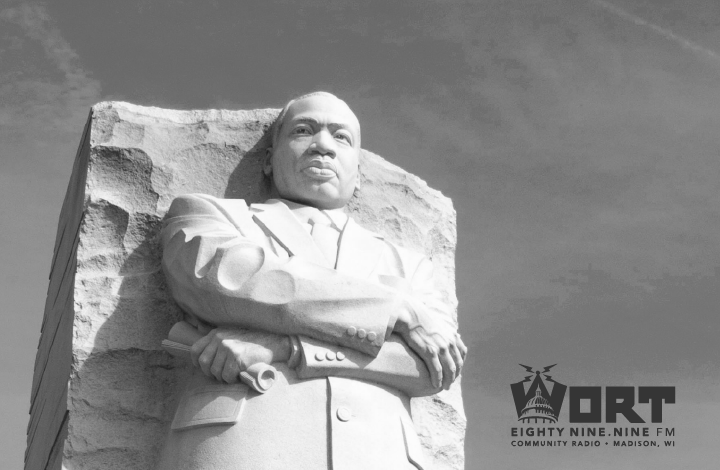 Stay tuned through the day to hear programming centered around the King holiday. The Eight O’Clock Buzz will speak with members of the Legislative Black Caucus during the 8am hour and Madison BookBeat will speak with Daphne Barbee-Wooten on her book, Justice For All: Selected Writings of Lloyd A. Barbee, during the 1pm hour.