A “Celebration of Life” event will be held on Friday, February 24, 5:00 pm to 8:00 pm at the Madison Concourse Hotel Grand Ballroom. Hosting and MCing the event will be radio personality Michael Feldman.

Clyde Austin Stubblefield was born April 18, 1943 in Tennessee. A native of Chattanooga, he was a professional drummer by the time he was a teenager. He moved to Macon, Ga. and began playing with Otis Redding. There, he was introduced to Brown and became a permanent member of his band. Stubblefield performed on James Brown’s albums of the civil rights era, including “Cold Sweat,” “I Got the Feelin’,” “It’s a Mother,” “Say It Loud — I’m Black and Proud” and “Sex Machine.”

Perhaps Stubblefield’s most profound impact on music was the song “Funky Drummer,” recorded in 1969. His 20 second drum break in that song ended up being sampled in Public Enemy’s “Fight the Power,” LL Cool J’s “Mama Said Knock You Out,” Boogie Down Productions’ “South Bronx,” Sinead O’Connor’s “I Am Stretched on Your Grave,” George Michael’s “Freedom! ’90,” Kenny G’s “G-Bop” and thousands more. The New York Times wrote “It made him perhaps the most sampled drummer in history.”

Clyde Stubblefield settled in Madison shortly after he left Brown’s band. He played locally at nightclubs and performed regularly on the Wisconsin Public Radio program “Whad’ Ya Know?” hosted by Michael Feldman. He was inducted into the Wisconsin Area Music Industry Hall of Fame in 2000, and a pair of his drumsticks are in the Rock & Roll Hall of Fame.

A crowdfunding campaign has been set up at https://www.gofundme.com/wqmy9-clyde-stubblefield-funeral-fund for those wishing to donate to help pay for funeral costs and family expenses. 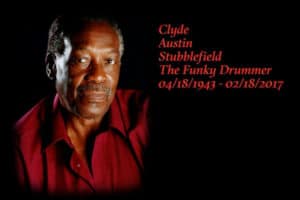