A new documentary film by Robin Hauser called bias made its way to Madison on the evening of Tuesday, June 5. Though the film is on the festival circuit, the screening in Madison was for a slightly different crowd: workers. Nearly six hundred employees in business, health, and education from across the city came to the Orpheum Theater in order to better understand implicit and unconscious bias in the workplace and in our communities.

But what is unconscious bias? Throughout the documentary, filmmaker Robin Hauser interviews academic experts, business leaders, athletes, police officers, and community members to get a full picture of how unconscious bias plays out. The Kirwin Institute for the Study of Race and Ethnicity defines it as “the attitudes or stereotypes that affect our understanding, actions, and decisions in an unconscious manner.” In other words, it’s bias that is involuntary. Unintentional. We all have these unconscious biases, and there’s a good chance we don’t even know about them.

“Anyone who’s human has a bias, or is biased, and understanding that and then deciding what you’re going to do about it is important,” says Zach Brandon, the president of the Greater Madison Chamber of Commerce, who organized the film screening at the Orpheum. He reached out to Hauser when he heard about the new documentary. Brandon wanted to bring her work back to Madison so that the city can be at the forefront of the conversation about bias in the workplace.

Hauser says she focuses on workplace bias in the film because of how prevalent it is. “There’s a large population of people in the world that do work, and I think that a lot of people find that unconscious bias [there],” she said in an interview after the screening. “When you’re put in a workplace, you have a lot of different types of people put together and sort of forced as a community to work together, and I think that’s where a lot of unconscious bias comes out and comes into play. You don’t see as much of that when you’re with your friend group because, chances are, your friends are pretty much like you. So I think that’s when it gets really interesting and where we see these things manifest [themselves]: either in large community events or in the workplace.”

After all, many people have jobs and all of us have unconscious biases, whether we like to admit it or not. Hauser addressed this issue in her talk after the film: “I would ask people, and I would say to them, ‘So, you know, are you biased?’ ‘No, I think I’m pretty open-minded.’ ‘Okay, can you share any of your biases?’ ‘No, honestly, I’m really open-minded.’ ‘Well, what about your friends and family—do you see bias in them?’ ‘Oh yeah!’ Every time, I’m telling you, every time. It was crazy.”

Throughout the film, Hauser shows herself taking several of Harvard’s Implicit Association Tests online and discovering she has unconscious biases she hadn’t expected. Among the overall findings of these tests, 64% of respondents prefer straight over gay people, 68% prefer white over black people, 75% prefer thin over fat people, 77% prefer young over old people, and 78% prefer able-bodied over disabled people. These are all unconscious biases, not necessarily based in a person’s expressed values. But, as Hauser makes clear throughout the documentary, these do affect our lives and our communities. 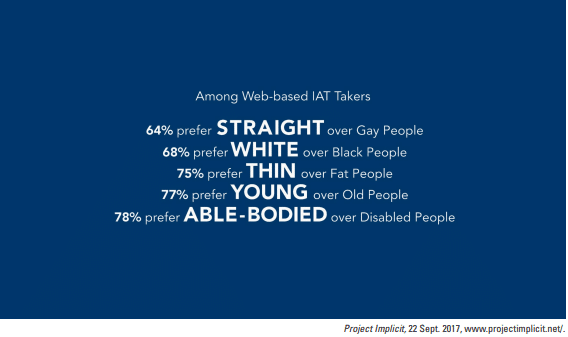 Madison civic leaders are concerned about disparities in the workplace and are trying to find solutions, starting with educating as many people as possible about implicit bias. “The reason why we wanted it to be a community conversation is because we do truly believe that acknowledging it makes us stronger, [and] that trying to hide from it would make us weaker,” said Zach Brandon from the Chamber of Commerce. “And if we can acknowledge it, then that gives us the opportunity to be the platform and, in fact, the laboratory for change.”

After the screening, the Chamber polled attendees on their cell phones to see what they thought of the film. Sixty percent of respondents said they wanted to have more discussions about unconscious bias in their workplace. Both Hauser and Brandon emphasized that there are no easy solutions, but that initiating these conversations is a good place to start.

This story was reported by Richelle Wilson for WORT News.