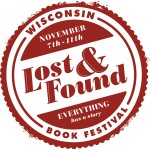 On Friday November 2, in this special Wisconsin Book Festival edition, our host Jonathan Zarov speaks with directors of the festival Megan Katz and Allison Jones Chaim, as well as Cherene Sherrard-Johnson, Professor of English at the University of Wisconsin-Madison.

The festival, themed “Lost and Found,” runs from Nov 7 – 11, with many of the events taking place at the Overture Center and several other locations in Madison, Wisconsin. Jonathan asks Allison and Megan how much of the work at the festival is ‘local’; Allison explains “upwards of a third, maybe even as many as a half have some kind of Wisconsin connection. It’s not necessarily that the work is about the local, but there are these Wisconsin connections that make people want to come back.” One such author is Cherene Sherrard-Johnson.

Cherene, author of Dorothy West’s Paradise: A Biography of Class and Color, will be presenting at the festival on a panel – Recovering Black Women from the Harlem Renaissance and Beyond along with Tracy Curtis and Ethelene Whitmire. The book deals with Harlem Renaissance author Dorothy West, whose work was ‘lost’, “[Dorothy] was one of the younger writers to come to Harlem during the Renaissance, but she was the longest lived writer [of the Renaissance]…she didn’t die until 1998, so she really outlived almost all of them. She wrote for much of her life, but because her first novel didn’t come until 1948, and then she didn’t write for almost fifty years another novel, many people forgot about her.” When asked if the Harlem Renaissance writers, in general, made a living from their works, Cherene explains, “No, even the ones you know of, like Zora Neale Hurston famously died on an unmarked grave until Alice Walker discovered her, so this theme of recovery or discovery is one that often is happening again and again. Most of the [Harlem Renaissance] writers, with the exception of Langston Hughes…stopped writing, disappeared, died…”

Jonathan asks Cherene to compare the Harlem Renaissance with the literary scene today in the United States, “The Harlem Renaissance really was an integrated movement, an interracial movement, because you did have this coalition of black artists and white publishers and patrons who were, in many ways, funding the art. That’s part of why there was such an artistic explosion. You also had black writers during the time saying ‘we want to be independent, we want to create our own aesthetic that isn’t so much appealing to the mainstream’… it really had a political component to it…people were hoping that through this artistic work we would change images, ideas around black folks in society…that there would also be a corollary in the social world… And I feel like now, people have been talking for a while about a kind of renaissance in black poetry in particular”  She affirms that there has indeed been a resurgence of black poetry today.

For more information about the festival, visit wisconsinbookfestival.org