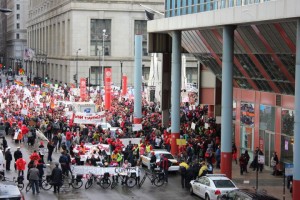 The citywide day of action brought tens of thousands of people into the streets and onto picket lines in Chicago as part of an intensifying fight to keep public services and institutions funded.

Leading the charge was the Chicago Teacher’s Union, whose 25,000 members engaged in a one-day strike against what they say are the unfair labor practices of the Chicago School District.

But those who participated in Friday’s actions–from teachers and parents to university faculty, low-wage workers, and Black Lives Matter activists–said there is much more than just teachers’ salaries at stake.

WORT’s Darien Lamen spent the day in Chicago, and filed this report from the front lines of Illinois’ “fight for funding.”