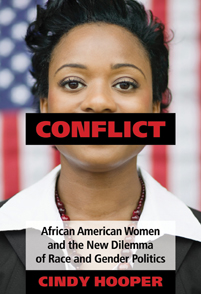 On Wednesday October 24, Jan Miyasaki spoke with Cindy Hooper, author of Conflict, African American Women, and the New Dilemma of Race and Gender Politics. In her book, Cindy surveys the history of black women in American politics in both women’s suffrage and in the civil rights movement. She looks specifically at the 2008 presidential election, examining how race and gender politics have shaped their political decisions.

Cindy cites the lack of adequate research about the African American women subgroup and their influential role in the presidential elections as the reason that prompted her to explore the topic further and write her book, “there was one statistic that kept coming through the wires…that African American women had the highest turnout rate percentage of all racial and gender demographics in the 2008 presidential election. So I began to look for more books and more research about this specific subgroup, and I couldn’t find too much, so at this point… I felt someone had to examine this, and I wanted to be the one to do that.” Cindy explains how this particular voting bloc has been largely overlooked and passed over to focus more on others, “Given the fact that we are President Obama’s most loyal voting base, in a traditionally loyal voting base of the Democratic Party, it is disappointing when we feel we are not in the forefront of the candidates, in terms of their focus and making us a priority in their presidential campaign.”

African American women participated in two struggles: the women’s suffrage movement and the civil right’s movement. This dual struggle, which was unique to African American women, created internal struggles in which they were often torn as to which direction to focus their attention upon. In her book, Cindy discusses the issue that many of the women faced regarding the “prioritization of race over gender.” She explains how, during the civil rights movement, the issue of women’s rights had to take a step back, noting how during the 1963 march in Washington, black women were not asked to speak, the focus being instead on the black male leaders of the movement, “we were strong workers in the background of the civil rights movement, and a lot of it was by choice, because we felt that the black men should be in the forefront, and they, in effect, became the leaders who were the most visible within that movement.”

The book also talks about women of color in politics today, mentioning congresswoman Cynthia McKinney and Rosa Clemente who ran in the green party, “that was a huge moment of progress for women in general, particularly women of color.” Cindy notes that many of these women were elected during the 2010 midterm elections, many of them benefitting from the increase of voter registration among minorities during the 2008 presidential elections. The book mentions congresswoman Terri Sewell, the first African American woman elected to Congress in Alabama, Jennifer Carroll, the first African American to be elected lieutenant governor to Florida, and Kamala Harris, of African American and Native American descent, elected Attorney General in California.

Cindy Hooper will be speaking about her book at Edgewood College tonight, October 24 at 4:00PM.
Visit Cindy’s Twitter account here.