This Friday night, April 26 on “The Rattlesnake Shake”, D.J. el Serpentine welcomes local “punk ‘n roll” band Cindy Set My Hair On Fire into the studio to light up the airwaves with a scorching set of high-octane rock music for your listening pleasure! “The Rattlesnake Shake” comes on WORT 89.9 FM right after “Blues Cruise” on the 4th Fridays of the month, beginning at 8:00 pm and concluding at 11:00 pm (Central). Cindy Set My Hair On Fire will start their live set in the “sweet spot” at 9:00 pm, followed by a quick interview. The band has been quite active as of late, coming off well-received shows at the Crystal Corner Bar and High Noon Saloon, so we expect a tight and energetic set this Friday night! 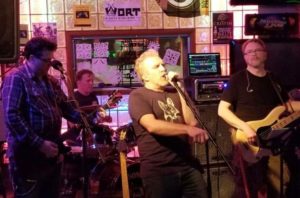 The following is a brief bio of Cindy Set My Hair On Fire:

Friends since playing in middle school band together, vocalist Todd Streicher and guitarist Joe Johnson met for lunch in the summer of 2014 to talk about starting a band to play a stylistic mash-up they dubbed “Punk ‘n Roll”. When Todd later tapped longtime friend and bassist Kenn Busch and Kenn’s drummer-neighbor John Clark, Cindy Set My Hair On Fire was born. What Cindy Set My Hair On Fire has become in the intervening years is not your typical cover band. Their set list includes an eclectic mix of punk and straight ahead rock ‘n roll, with a few genre spanning surprises thrown in for good measure – each with a thick layer of “Cindy Sauce” applied to them to make each songs their own. Based in Madison, Wisconsin, Cindy Set My Hair On Fire has gone on to bring their high level of energy and engagement to audiences from Janesville to Stevens Point and everywhere in between. Cindy Set My Hair On Fire’s earnest, heartfelt, and impassioned shows make for a sublime diversion for everyone. But the best part is, it’s clear to anyone who has attended any of their many performances that these guys have genuine fun while spreading their Punk ‘n Roll doctrine to the masses.