This week is Disability Voting Rights Week, and city officials and disability rights advocates met on the steps of the City-County Building today to raise awareness of the barriers disabled folks face at the polls.

Formerly known as National Disability Voter Registration Week, the week-long event is run in partnership with the American Association of People with Disabilities.

“Disability Voting Rights Week is a nonpartisan, community led initiative that is dedicated to the visibility, empowerment, and education and engagement of disabled voters,” says Mayor Satya Rhodes-Conway

Here in Wisconsin, the week could not have come at a more opportune time, as last month a federal judge ruled that voters with disabilities are entitled to help from a third party while casting their ballot. The ruling was a win after the state Supreme Court ruled earlier in the year that only the voters themselves are allowed to return their ballot in person.

Norman Davis is the director of the city’s Civil Rights Department. He says that uplifting the rights of disabled folks in Wisconsin is an intersectional action. 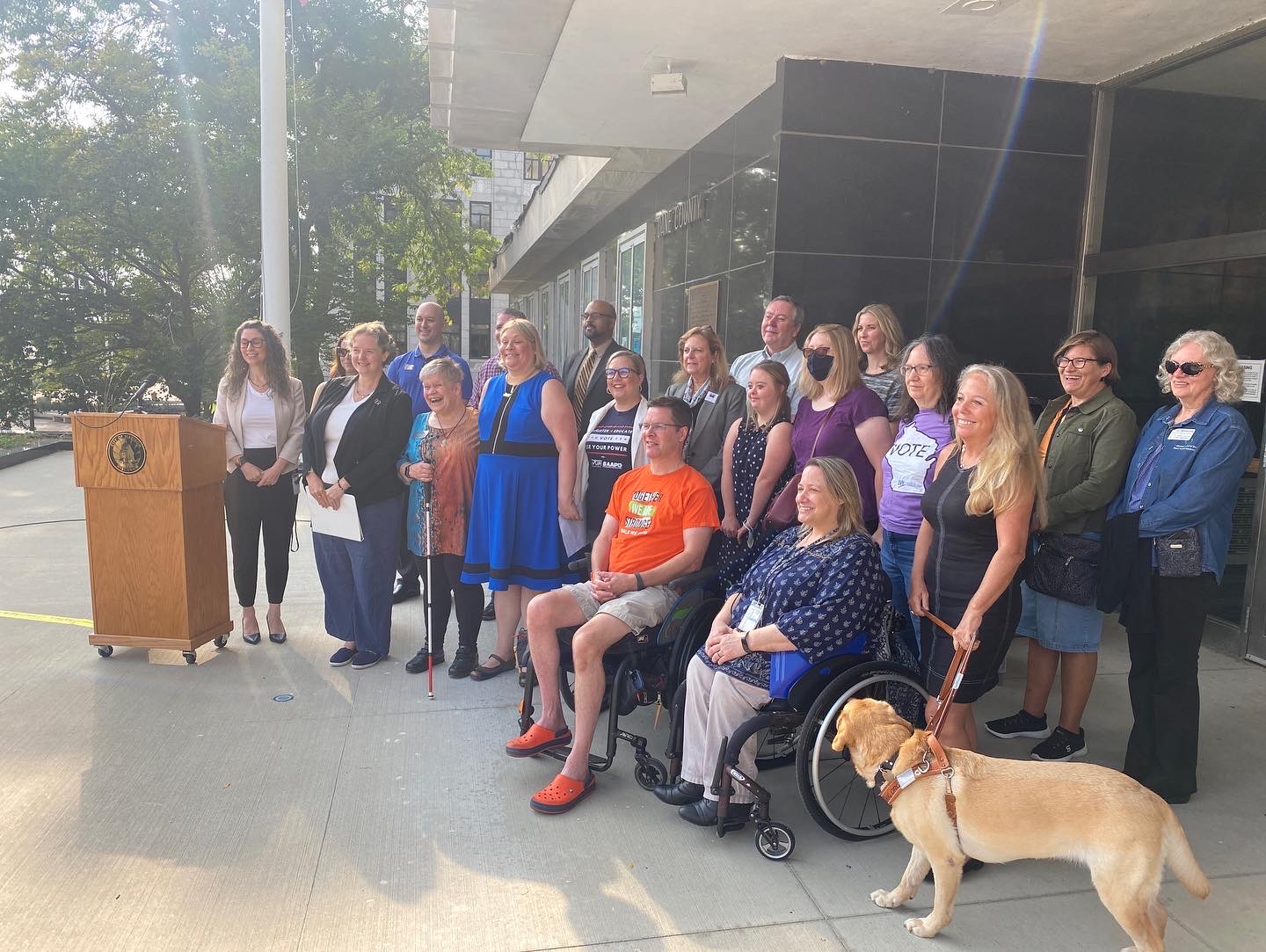 The lack of access disabled voters face in Wisconsin is unfortunately not a rare occurrence. According to a 2021 report from the Program for Disability Research at Rutgers University, almost two million people with disabilities nationally reported having trouble voting in 2020. And while both state and federal laws are supposed to close these access gaps, it doesn’t always shine through in practice.

One such gap exists with voting assistors. Voters with disabilities are legally entitled to have an assistor of their choice to help them read, mark, and turn in their ballot. These assistors are allowed both in absentee voting and at their polling location.

Denise Jess is the Executive Director of the Wisconsin Council of the Blind and Visually Impaired, a nonprofit organization aiming to empower disabled folks in Wisconsin through education and advocacy.

She says that just because voters with disabilities are allowed to vote with an assistor, it doesn’t always materialize on election day.

“We know that, for voters in the state of Wisconsin who choose to have an assistor, that they have had their assistor’s legitimacy questioned by poll workers and clerks,” Jess says.

Those assistors can be anyone of the voters choosing, other than the voters employer, union steward, or someone on the ballot.

Jess says that the role of a voter assistor is a very personal and intimate choice for voters with disabilities, because they have to trust those assistors to accurately help them turn in their ballot.

Another area where Jess sees barriers to voters with disabilities here in Wisconsin is the polling machines themselves. State law mandates that all polling locations have accessible voting equipment on site on election day. But Jess says that just because the equipment is there, it’s not always ready to use.

“Too often we also hear that the accessible voting equipment is not plugged in when the voter gets there. Sometimes it segregated in a corner away from the other polling stations and removed from the active part of the voting. Sometimes it’s not programmed yet, sometimes the print cartridge hasn’t been changed in a long time and poll workers are taking the print cartridge out and banging it, and many of our municipalities around the state continue to use equipment that we would call antiquated and not voter friendly,” Jess says.

The city’s accessible voting machines are called ExpressVote. The city first got the ExpressVote machines around 2017, and has around 130 machines in total, at least one for every polling place in Madison. The ExpressVote machines do not save any information, and are not connected to the internet. The machine will just create a filled-in ballot to be inserted into the ballot machine like any other ballot.

Denise Jess says that these machines are not just for voters with disabilities. In fact, Jess says that she welcomes anyone and everyone to use the accessible voting machines.

“When you use that accessible voting equipment as a voter, you help liberate all of us by making the equipment known, and helping poll workers see the value of that equipment,” Jess says.

The Election takes place on November 8.