On the corner of Mifflin and Bedford Streets near downtown Madison, inside a small former laundromat, is the Lion of Judah House of Rastafari Church. A neon light hanging in the storefront advertises cannabis.  Several flags hang depicting pot leaves and Lion of Judah imagery. Smoking paraphernalia and pre-rolled joints line the window sills.

The doors are locked. You have to give a knock and a wave to get in. There’s a steady flow of people stopping by to see if it’s legit.  They make a donation either in cash or through the Venmo app on their cell phone. In return, they can pick up Rastafari literature or cannabis gifts. The cannabis gifts include a variety of buds, edibles, THC infused drinks and vape cartridges.

The place is run by two guys: Jessie Schworck, who goes by Ras Jesse, and Dylan Bangert.

Ras Jessie says he connected with the Rastafari religion through his Christian background and his first experience with cannabis. Now he wants to share his love of the herb with others.  “We’re trying to give people more than just herb here,”  he says. “We’re trying to give them insight into some of these scriptures and some law as to how they can be free.”

In order for people to pick up cannabis, Ras Jessie has them sign up as a member of the church, which is done by simply writing your name on a card, signing it and having him stamp it. He says that his ability to smoke and share cannabis is protected religious expression.

Ras Jessie says the state approved the church as a religious organization and the local community has been more than welcoming. Madison police and city attorneys say otherwise. “Our opinion is that they are not legal”, says Madison City Attorney Michael May.

Last month, Madison police officers visited Lion of Judah in response to a noise complaint. No one was arrested and no charges were filed, though the cops seized five ounces of cannabis and paraphernalia.

“No arrests, no charges have come from that,” he says.  “But they haven’t returned my property and they continue to harass our landlady. So now I’ve filed an injunction against them, a restraining order injunction against the police and the city attorney’s office and those people that are participating and that harass me. And so, I filed that and now it’s in the process of working its way to them.”

His lawsuit was dismissed on a technicality by a local judge, but Jesse says he plans to refile. He’s representing himself.

Some visitors seem blissfully unaware of the legal problems facing the Lion of Judah. 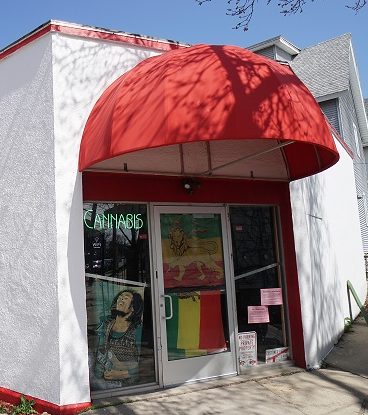 First time visitor and Madison College student Aderer Laveaga doesn’t see any issue with the church giving out cannabis.  “I really want to see how far it goes. I really hope it’s legit.”

A returning member named Shawn said he has found a spiritual community at Lion of Judah. He called the police and city actions un-American. “I really enjoy the more community aspect of it, of the religion itself”, he says. “The idea of getting together with a group of folks and praying in more of an informal setting. It’s not as intimidating as being in the Catholic Church which I grew up in.”

Ras Jessie says he doesn’t have a lawyer, but cites a unanimous 2006 US Supreme Court ruling about religious freedom. That ruling allowed a small religious group to import a hallucinogenic plant from the Amazon for use in their religious ceremonies.