Clarence Gatemouth Brown will be the featured artist on Blues Cruise this Friday night from 6-8 PM Central time.  This show was originally aired March 6, 2004 just prior to his appearance at Luther’s Blues that month.  It features interview and songs covering his entire career.  Gatemouth Brown did not consider himself a “blues” artist as he played jazz and other musical genres. I saw him once on the main stage at the Chicago Jazz Festival.

Son House is the featured artist on Two For the Blues Saturday night from 8-10 PM Central time.  House’s story will be told by Dick Waterman who was one of his co-discoverers in 1964 which resulted in a career for Dick as his manager and promoter.  Son House was a major figure in the development of Delta blues which heavily influenced Chicago blues styles in the 1950s.  Muddy Waters and Robert Johnson were among the artists he influenced.  Muddy considered him his major mentor in the blues.   This show was originally broadcast September 18, 1999.  It had to be recreated as I did not have a copy of the show.  Fortunately I still had a playlist and the interview.  I think it had to be one of my first attempts at doing feature shows like this.   ( Photo By Unknown author – https://it.wikipedia.org/wiki/File:Son_house.jpg, Public Domain, https://commons.wikimedia.org/w/index.php?curid=40598149 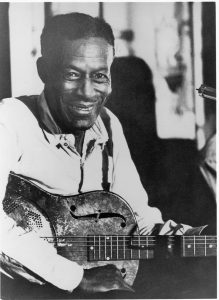