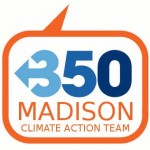 On Monday December 3, our host Linda Jameson spoke with student activist Emmy Burns about climate change. Emmy Burns is a junior at the University of Wisconsin-Madison, studying environmental studies and geography. They spoke about the steps the Madison community can take to combat or respond to climate change. 350 Madison, a local action group of 350 tackling climate change, has recently established a student chapter on the UW-Madison campus: Climate Action 350 at UW-Madison. The student chapter has begun a campaign to prompt the UW Foundation to divest their investment of roughly 2 billion dollars from oil, coal, and natural gas. “350”  refers to the permissible limit of carbon dioxide that can safely be in the atmosphere; specifically, the parts per million of carbon that can be present in the atmosphere at a safe level. Currently, the level is at 392. Clean Wisconsin and 350.org had recently brought climate change spokesperson Bill McKibbens to speak in Madison about the math of climate change.

Explains Emmy, “That is how we can make our difference here in Madison. The companies have so much political capital because of all their money. If just the UW Foundation divests, that’s not going to put a huge dent in their profits. But if we can create a domino effect across the country, and there are already hundreds of campuses that have these divestment campaigns underway, together its going to make a difference. These fossil fuel companies make their money from people who buy stock. If we can devalue their assets, hopefully over time that will translate to less political power.”

The group has been collecting petition signatures addressed towards the UW Foundation, calling for a freeze on all new investments in fossil fuels, and a complete divestment of all fossil fuel holdings within the next five years. They have collected 1,000 signatures so far. They will hold a peaceful march to deliver the signatures to the President of the UW Foundation on Monday, December 3 at 9:30 AM.