Brian Liston, the owner of Clutch, has opened a state-of-the-art facility at 2987 Yarmouth Greenway Drive in Fitchburg and, after a few months of operation, the studio is almost booked to capacity.

Clutch is the successor of the legendary Smart Studios, the musical nexus of 90s music including Killdozer, The Smashing Pumpkins, L7, Tad and Nirvana. Liston bought Smart Studios from its founders in 2013 and tried operating it from its birthplace at 1254 East Washington Avenue. It was around that time when Liston had to install a second industrial-sized sump pump to combat basement flooding. “Water and electronic gear are not good friends,” Liston says, “So we found a facility that was about to be constructed and had the opportunity to build a new studio from the ground up, a studio that was meant to be a studio from the very beginning.”

There are two problems a studio must solve: sound, of course, and wires. Clutch solved the first problem by completely isolating each room, including the 40′ x 40′ performance space with 19′ high ceilings. That entire room is built on an “air floor,” a floor raised about a foot over the building’s slab. The room is also heated and cooled by over-sized equipment that is essentially silent. To handle the wires, the entire space was built with large diameter PVC pipe in the walls that makes it ridiculously easy to run cables from from both control rooms to every studio.

Regarding control rooms, Clutch has two. “Edit A” is set up for audio / video production with state-of-the-art 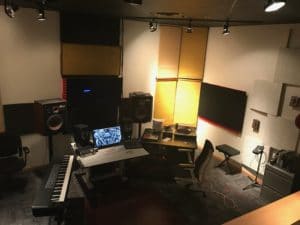 equipment. It’s a spacious, sonically-balanced room that clients can relax in while they do their work. At the center of the gear is a Mac Pro that’s been customized to let Clutch produce 4k video. While “Edit A” is tuned for digital production, “Control C” is focused on analog mixing and streaming services. There’s another Mac Pro as well as additional, dedicated computers for streaming ISDN Source Connect, Skype and Wirecast. And all of this is tied into a solid state Logic X-Desk board.

“Control C” is adjacent to “ISO E,” an Isolation Room with a natural rock wall and a 12’ high ceiling that makes the room sound much bigger than it looks. Inside are high-end tube and ribbon microphones, a personal mixer system and access to every other room and computer in the entire studio.

Musicians and video crews travel with lots of gear and Clutch has anticipated that. “Dock G” is on the ground floor to easily load gear in and out. It’s also a workshop with an array of power tools to make it easy to repair or construct most anything needed. And even “Dock G” is wired for sound from any of the studios. 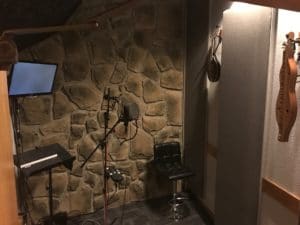 But even with all of this, the crown jewel of the studio is “Stage F,” that 40’ x 40’ space that’s ideal for audio and video production. At a recent open house Liston hosted for the local music community, this is the room where the large crowd gathered and mingled and musicians set up to jam through the night.

All of this was created for the Madison music community. Liston says, “I’ve worked all over the country, and I learned there’s no place like Madison. There’s a music scene here like no other and I created this studio to support it and help it grow.” In addition to building Clutch 15 years ago, Liston is a producer, director and writer for films and he also produces and writes music for films. “We’re here for Madison and ready to rock.”