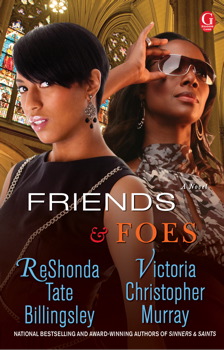 ReShonda Tate Billingsley, co-author of Friends & Foes, spoke with the 8 O’Clock Buzz about her new book. She also talks about her life and her success. She was a television news anchor and reporter but now is a full time writer with 26 books in her repertoire. She self-published her first book but now is with Simon and Schuster.

The second interview on this page is ReShonda Tate Billingsley joined by her co-author, Victoria Christopher Murray, another accomplished author. Murray has 21 novels published.

The book description from Amazon:

“Now that Rachel Jackson Adams’s husband has won the coveted position of president of the American Baptist Coalition, Jasmine Larson Bush has concocted a scheme to one-up her rival—by promoting her new community center on the nation’s #1 television talk show! The power play won’t stop Rachel, who jets from Houston to Chicago to sabotage Jasmine’s TV appearance. But Chicago is the last place Rachel should be when one of the Coalition’s heaviest hitters turns up dead— and Rachel looks guilty as sin. Will her nemesis leave her stranded and let her take the rap? Or will Jasmine help Rachel hunt down a killer? Could danger this deep turn the enemies into BFFs? After all, miracles do happen. . . .”

Listen to both interviews below.