On Friday, April 26, 2013, Joining Jonathan Zarov in the studio was vocalist and guitarist, Randi Russo and drummer, Andy Miles. 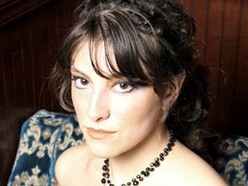 The New Missionaries is playing at The Frequncy on April 29th, 8:00PM. Also playing that night, Crown Larks.

BAND BIO  New Missionaries was formed in the fall of 2012, the night that Randi Russo, a recent transplant from New York, performed live at Transistor Chicago, the gallery/shop/performance space owned by drummer Andy Miles.  Miles was so impressed by Russo’s solo set he offered to be her drummer and put the rest of a band together.  Charlie Crane (Airline-X, Feature Flick) joined the following week on lead guitar, with bassist Eric Gannon, another recent transplant from New York, joining in March of 2013.   They plan to begin recording their debut EP in the spring of 2013 with a release date planned for the summer.