Now that Autumn has arrived, football season is in full swing. But it’s not just football players who can get concussions. So, tonight, the Perpetual Notion Machine explores the subject of concussions, particularly when suffered by youth athletes, with our two guest experts. As a neuropathologist, Dr. Ann McKee dissects the brains of recently passed athletes, many ex-NFL players, to determine if chronic traumatic encephalopathy, or CTE, is present. CTE is a progressive, degenerative disease that affects athletes later in life, caused most likely by many hits to the head when younger. Dr. McKee is chief of neuropathology at the VA Boston Healthcare System and director of the CTE Center at Boston University. She has only found traces of CTE in a couple of teenage athletes who died prematurely, but believes youth athletes may suffer more harm from concussions and head impacts. Traci Snedden, researcher and Assistant Professor in nursing at UW-Madison, agrees that youth athletes are more susceptible, but their brains may also be able to recover sooner. She and several of her colleagues want to find out, so they initiated a study that began last fall. The study is still on-going, but they have been in the process of enrolling Madison high school football players, and their parents, who may have experienced the symptoms of a concussion. The subjects are presented with, and respond to, an extensive list of questions several times over a four week period. No data has yet been collected, so no conclusions can be verified. But Traci hopes that this study can lead to more comprehensive research into youth concussions, and eventually, to helpful strategies for dealing with youth concussions.

The image below and the featured image is a slice of the brain from ex-NFL player Ollie Matson, who played 14 seasons in the NFL. The dark brown areas show the result of CTE damage. 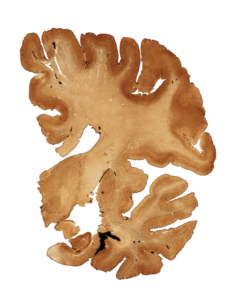