Protesters marched Tuesday night and Wednesday morning to protest the arrest of Yeshua Musa and demand his release from the Dane County Jail.

Musa, whose legal name is Devonere Johnson, has been a frequent organizer and participant in Madison’s Black Lives Matter demonstrations against systemic injustice.

Protesters gathered a few blocks from the Dane County Jail, and gave speeches on top of a Schmidt’s tow truck that was originally deployed to disperse the crowd.

Says one protester, “That man in jail because he’s standing up for what he believe in. He’s not in jail because he tried to escape the cops. Yes, he had a bat. Wal-Mart has bats. Let’s go take Wal Mart to jail. He was outside the establishment. We comin’ to get him tomorrow morning.” 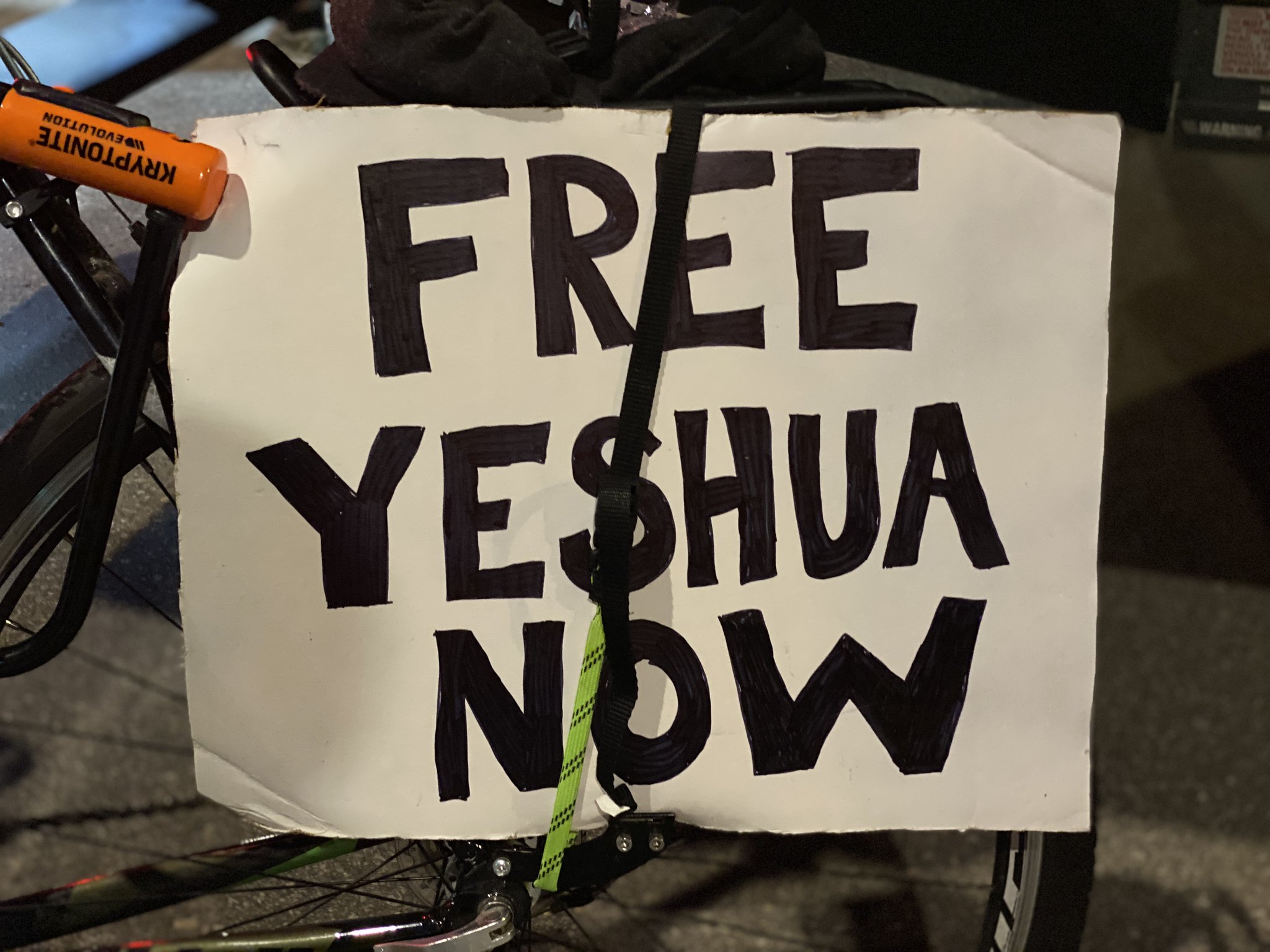 Another person explained the roots of the protest.

“We out here every day. Black lives matter every day. Our Black men, women, children; our sisters, our brothers, our fathers, are getting abused, constantly, by the system. Y’all might just want to support one day but this happens every day.  And we live in fear of our lives. When I’m driving in my legally registered car, with my legal license, I’m still afraid of the police when they pass me. I’m still looking a mile down the road after they been gone to make sure they don’t turn back around and come to arrest me. Black people live like this every day. So come out and support this movement, this revolution, because we about to break this whole system down.

Throughout the night, protesters called on the media to leave the protests. Both media and bystanders who attempted to document the protests were surrounded and told to delete their pictures.

Around midnight, a crowd at the front of the protest attacked Democratic State Senator Tim Carpenter, who had attempted to record the protest and had not heard or heeded warnings from organizers not to do so.

Protesters tackled the State Senator to the ground, punched and kicked him, and took his phone.

In a conversation with protesters after, Carpenter attempted to prove his identity and claimed he was an ally, while protesters explained why they were on edge.

“Mandela Barnes is a friend of mine, and this is how I get treated? I had no idea. This is the first time I’ve ever been assaulted,” said the Senator.

Responded a protester, “This is the first time I’ve ever gotten shot at. ”

Yelled a third protester, “And this is the first time I’ve ever been arrested. And I’m a fucking veteran.”

Two statues that sit outside the Capitol were toppled by the crowd. The Forward statute, which rests at the base of the Capitol steps, was removed and dragged down State Street. A statue of Hans Christian Heg, a white abolitionist and major in  the Union army during the Civil War, was thrown into Lake Monona. 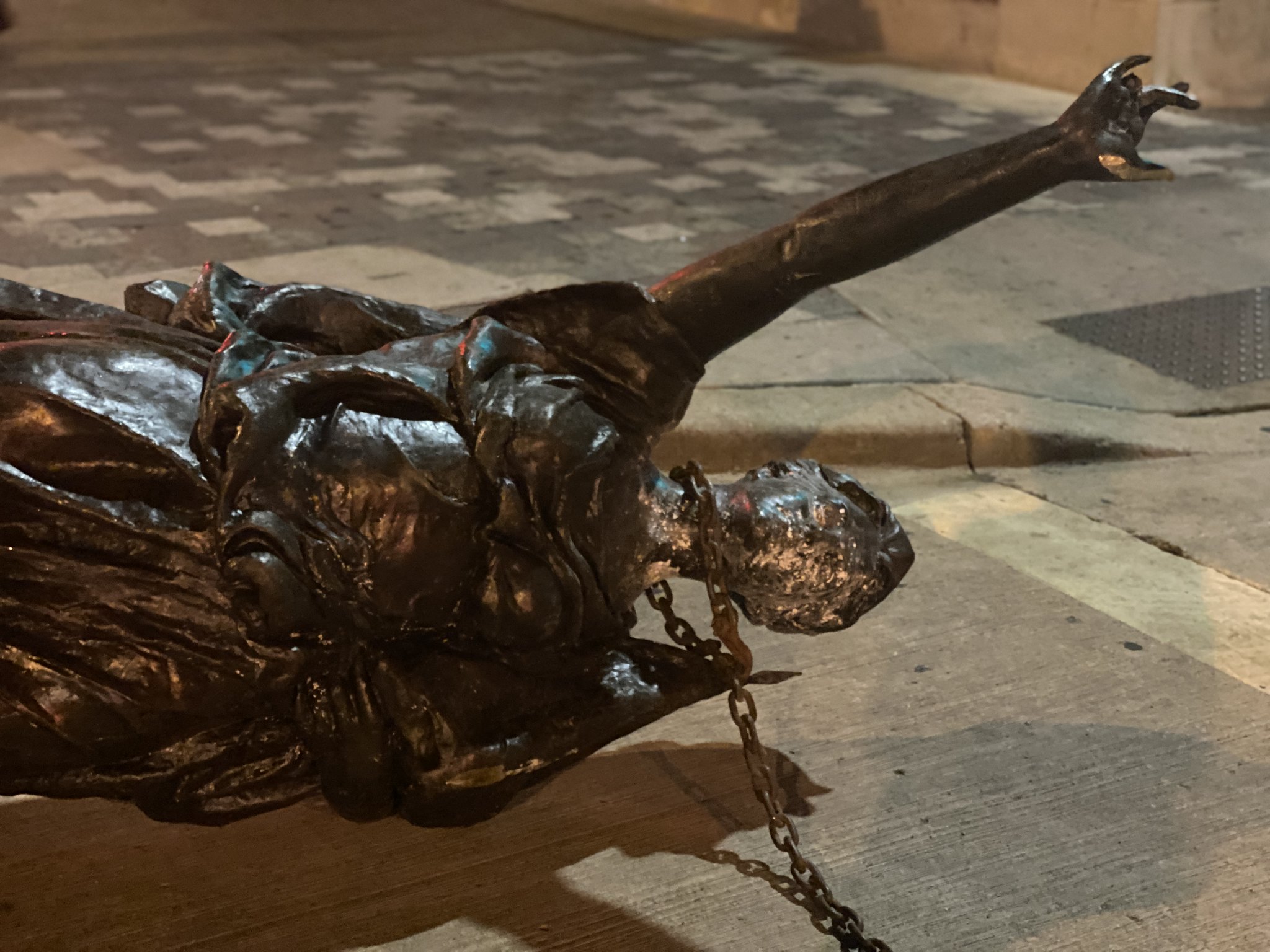 Several nearby buildings also had property damage, including windows on the first floor of the State Capitol and the nearby Tommy Thompson Center. Police say some officers used pepper spray to prevent people from entering the State Capitol.

In a statement Wednesday morning, Governor Tony Evers condemned what he called a “stark contrast from the peaceful protests across the state in recent weeks,” and condemned violence against people and property. The Governor has also mobilized the Wisconsin National Guard to assist local police for the first time in over three weeks.

Madison Police report someone also threw a “firebomb” into the City County Building, which houses inmates at the Dane County Jail, juvenile corrections center, and 9-1-1 Center.

According to a statement from Dane County Executive Joe Parisi, the firebomb landed near emergency dispatchers, who were then evacuated, requiring the activation of the backup 9-11 Center. Parisi also wrote, “spreading fire could endanger the lives of dozens of young people in the juvenile corrections center and the 180 inmates of the Dane County Jail who reside in the CCB. Setting fire to the building that houses inmates is not advocating for their well-being.”

The federal Bureau of Alcohol, Tobacco, Firearms and Explosives is investigating the incident.

Tuesday night stretched into Wednesday morning as protesters and police, outfitted in riot gear for the first time in more than three weeks, squared off. Police, in a line of more than three dozen officers, announced to protesters that it was an “unlawful assembly” and needed to clear the area. Protesters responded with a variety of chants, including “This is not a riot, this is a revolution,” and “Where’s our Mayor?”

In a press conference Wednesday evening, Mayor Satya Rhodes Conway said she was observing the situation all night and was in constant contact with the city’s law enforcement. 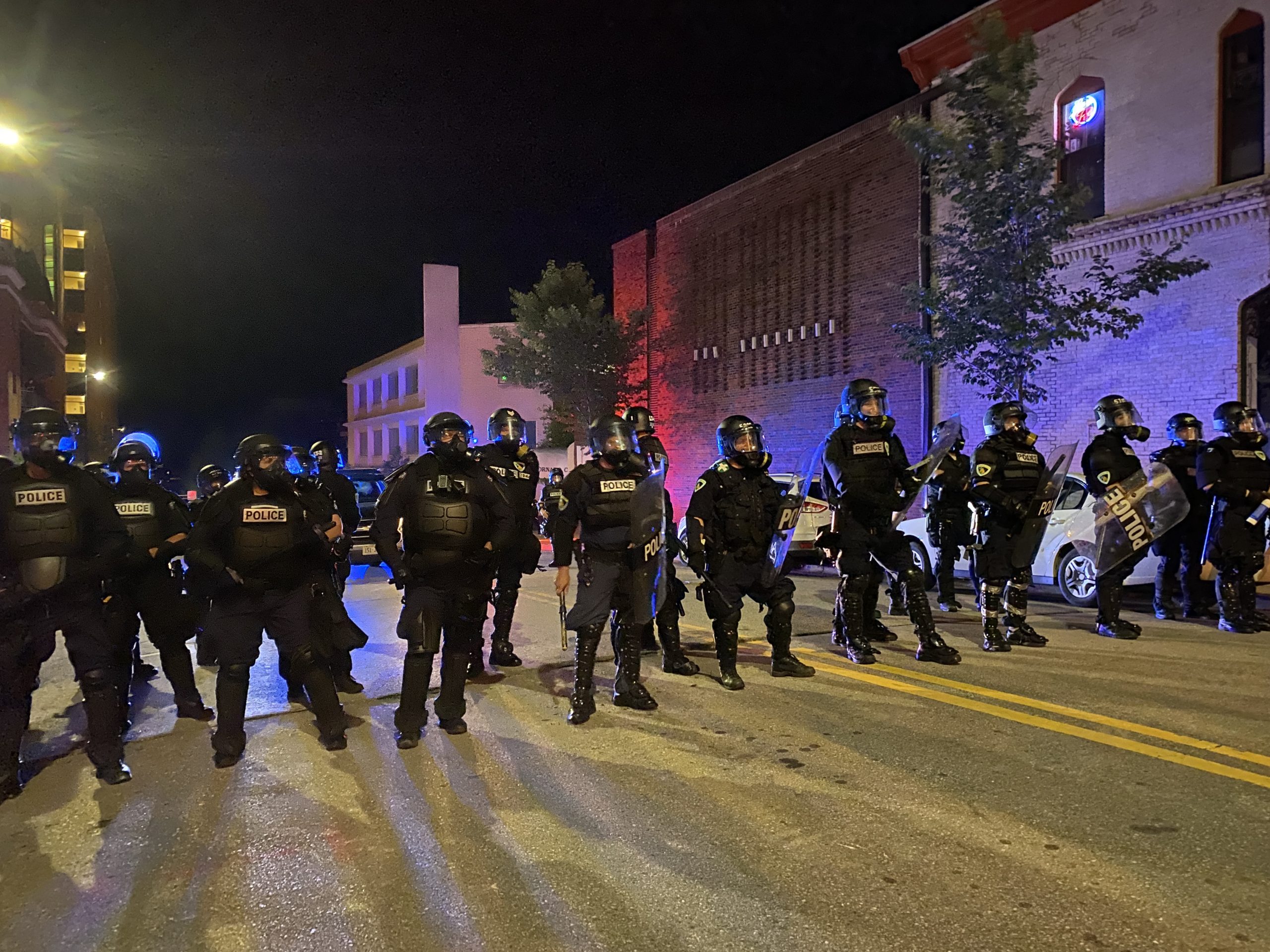 Protesters demanded the police leave before they dispersed. One protester at the front of the group says it was a lawful assembly, while another lead protester attempted to lighten the mood.

The night ended when Madison Police acceded to protest demands and backed away, got in their vehicles, and turned off their police lights. That was celebrated by protesters, who shouted “Go home killer cops” to their backs.

Ebony Anderson-Carter has been a spokesperson for recent protests. Wednesday morning, she spoke this on behalf of protesters to NBC 15 news, saying “Please don’t take the actions out here as violence. Take these actions as voices.”

Anderson-Carter also listed demands from protesters, including the defunding of the Madison Police Department and reallocation of funds to the community, the release of Yeshua Musa, and the firing of Madison Police Officer Matt Kenny, who shot and killed Black teenager Tony Robinson five years ago.

In a press conference this evening, Madison Mayor Satya Rhodes-Conway characterized last night’s protests as unlike any other demonstrations in the past three weeks.

“What happened in Madison last night was far from the peaceful protests that have largely marked our community’s grieving process in recent weeks. The behaviors that we saw were incredibly dangerous, putting peoples’ lives at risk.”

The move to end will be taken up by the Madison School Board next Monday.

Groups such as Freedom, Inc. have been calling for “no cops in schools” for years.