If you find yourself in a bit of a time warp while listening to The Flavor That Kills, you are not alone. The Madison-based band formed in 2012 from members of Awesome Car Funmaker, Hum Machine, and Screamin’ Cyn Cyn & the Pons – bands that operated with a wink and a nod to the musical stylings of the 1970s. 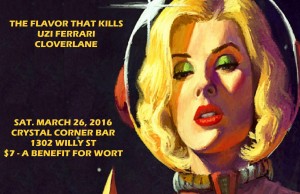 Without losing any of their previous bands’ energy or playfulness, The Flavor that Kills manages to incorporate that influence into a sound that is fresh, timeless, and authentic. Between the funky, pulsing rhythms, buttery-smooth guitar leads, and the use of the iconic and stylistically appropriate Rhodes keyboard, the result is something like looking at a retouched version of a washed-out vintage photograph. “We try to focus on the backbeat, and then layer on top of that,” drummer Eric Hartz told me. “The Rhodes is a necessary evil because it’s such a pain in the ass, but we make the sacrifice…it’s just too distinctive a sound to not give it its due”.

“We try to make that an influence,” said Eric about Motown and soul music. “We want to make music that people can dance to”. If the loose, upbeat tunes themselves don’t get a crowd to their feet, charismatic vocalist Ryan Corcoran will. “Ryan is a really talented singer, he can do almost anything,” Eric said, “He’s just a top-notch frontman type of personality…he feeds energy into the crowd”.

The band is currently working on the follow-up to their debut album, 2014’s Pablo’s Hippos. Produced by local genius Mike Zirkel, the new album was recorded entirely on analog at the band’s own studio. Eric told me that the increased time and focus allowed the soulful aspect of the band to come across even more. “I think the new songs are really good…this is the first time we’ve done our own album at our own studio. We’re all going to be really happy with it”. The album is poised for release in late summer or early fall of this year.

The Flavor that Kills bring their infectious grooves to the Crystal Corner Bar on Saturday, March 26 for a WORT benefit show in which a portion of the proceeds will go to the station. “Since they were the very first station to play my music (in the early 90s), I’ve always been a strong supporter of the community radio station model…I’m a real big believer that when you have the people of the community behind something, it is much more powerful”. Joining The Flavor that Kills will be one of Madison’s newest bands, Uzi Ferrari. Led by Eric Shinker, a local music veteran known by WORT listeners as former late-night host “The Deliveryman”, Uzi Ferrari sets out to make the type of immediate power-pop songs that you “feel like you’ve known your whole life”. On the strength of their energetic live performance and inescapably catchy songs, Uzi Ferrari is quickly becoming a local favorite. Also on the bill is Cloverlane, a local band including former members of Road Agent Spin, Sin City Injectors, and The Motorz. Cloverlane’s debut release, last year’s All These Stars in the Sky, is an impressive collection of tight, polished alt-rock; southern tinged and chock full of big, memorable riffs.

That’s The Flavor that Kills, Uzi Ferrari and Cloverlane with another great Musicians for WORT performance, this Saturday night at 10 pm at the Crystal Corner Bar, 1302 Williamson Street.