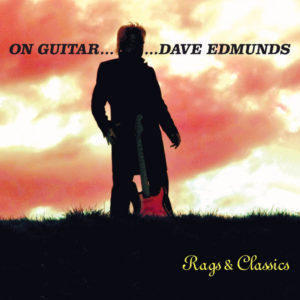 Guitar great Dave Edmunds Returns with his first ever all-instrumental album.
Over the years, Dave Edmunds has worked with some of the biggest names in rock history – Paul McCartney, Jeff Lynn, Elvis Costello, Carl Perkins, Stray Cats, Status Quo, and Dion (among many others), in addition to issuing albums as a member of Rockpile and his own solo releases. And now, for the first time in his career, he is issuing an all-instrumental album, ‘Rags & Classics,’ which will be released on June 9th, via the MVD Entertainment Group.

“I recorded this, off and on, at home, over a period of four months,” explains Edmunds, “But I guess the idea of making a guitar album had been lurking subconsciously since I was seventeen years of age. That’s when I discovered the fascinating guitar styles of Chet Atkins, Merle Travis and (later) Jerry Reed, along with other truly innovative guitarists of the fifties & sixties music revolution.”

Edmunds swapped California for Monmouth 12 years ago, ending an immersion in the US music scene which began after signing with Led Zeppelin’s Swansong Records. The US became his focus. Since basing himself back in native Wales, Edmunds set up his own digital recording studio allowing him to record new material his way.

“I’ve chosen a selection of what I consider to be ‘classic singles’ from the past, but with a Fender Stratocaster guitar interpretation, along with others reflecting my earlier influences. As with my recent album, ‘Again’, there was nobody else in the studio at any time – just the way I like it!”

Featuring a wide stylistic variety of selections (“Green Onions,” “God Only Knows,” “Your Song,” “I Believe I Can Fly,” and “Symphony No. 40 In G Minor, Molto Allegro” are just a few), there is a little bit for everybody on ‘Rags & Classics,’ which once again reaffirms Edmunds as one of rock’s most talented and adaptable guitarists.

About The Original Wilson Brothers

The very NEWEST releases and archival indie rock. Some classics as well.